Molière than Thou - Tim Mooney 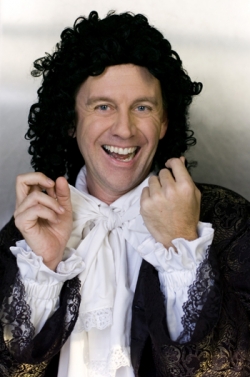 In his seven years of touring with Molière than Thou, Tim Mooney has introduced more than 50,000 people to Molière. His one-man show, with audience participation, is an anthology of his own translated scenes from Molière's classic, still hilarious, witty and relevant comedies.

The author of 16 celebrated new versions of the plays of Molière, Mooney has also composed a self-help book on acting, Acting at the Speed of Life.

Image: Tim Mooney as Monsieur Jourdain in a scene from The Bourgeois Gentleman