Sarah W. Heath Center for Equality and Justice
Working for healthy, sustainable, and just communities for all 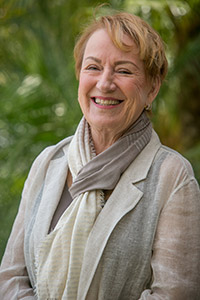 Sarah W. Heath has been closely connected with Cal Lutheran for the majority of her adult life. As a young wife and mother living in Camarillo, she longed for an opportunity to continue her education. She began taking classes and graduated from California Lutheran College as a proud member of the Class of 1970, and later earned a graduate degree from Pepperdine University’s Presidents and Key Executives MBA program.

Soon after, Sarah campaigned and was elected to a four-year term on the Pleasant Valley Recreation and Park District board. During that term, she served one year as president of the California Association of Recreation and Park Districts. After leaving the board position and an unsuccessful run for California state assembly, she became executive director of the United Way of Ventura County. Three years later, she was recruited by the larger United Way of Los Angeles and accepted the role of regional manager for the San Gabriel Valley.

As a lifelong volunteer with a desire for adventure, Sarah joined the Peace Corps in 1985. Her first assignment was a volunteer post in Botswana. After two years there, her contract was picked up for two additional years by USAID as a contractor through the Academy for Educational Development. She managed more than 25 nongovernmental organizations (NGO’s), similar to the nonprofits she consulted in the U.S. Among her many accomplishments in Botswana, Sarah established the first program to train NGO board members on how to be good board members and provide leadership to an organization.

A second assignment with the Peace Corps took Sarah to Bulgaria as Peace Corps director, responsible for 80 volunteers and all operations and programs within the country. Later, she served short-term USAID funded assignments in Bolivia, Kazakhstan, Kyrgyzstan, Bangladesh and Namibia.

Throughout her travels, Sarah remained committed to her support of Cal Lutheran. In 1990, she accepted a position as vice president of development, becoming the university’s first female vice president. Her affinity to Cal Lutheran extended to her family as well — her daughter graduated from the MBA program, and her son taught graduate level courses.

During this period, Sarah’s childhood best friend lost her son to drug addiction, catalyzing Sarah to establish an endowed scholarship in his memory — the Dan T. May scholarship. It is awarded annually to a Cal Lutheran student who is pursuing an education in psychology and a career as a substance abuse counselor.

When she began considering a planned gift to the university, Sarah was presented with the idea of supporting the Center for Equality and Justice (CEJ), and she felt it was a perfect match. “What I see at the CEJ is that they will be always on the cutting edge of social issues. Our social issues will change as times change. The CEJ can provide educational programs and training, be a safe place to go and ask questions, and a gathering place for people to get together to talk about sensitive issues. We want to be in a position to respond quickly when issues arise.”

Sarah has a long history of giving back to her alma mater and has made it her mission to inspire others to do the same. “I have a strong commitment and belief that we all need to be putting something back into our community. It’s a passion I’ve had since I was very young. Every person needs to step outside themselves and give – whether it’s time, energy or money. People can’t complain if they aren’t willing to get involved.”

Sarah’s legacy of service and commitment to her alma mater will carry on through the Sarah W. Heath Center for Equality and Justice at Cal Lutheran.