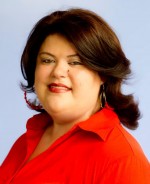 Dean, College of Arts and Sciences

Dr. Lavariega Monforti is Dean of the College of Arts & Sciences at California Lutheran University. She received her PhD from The Ohio State University in 2001. Her research primarily focuses on the differential impact of public policy according to race, gender and ethnicity. She is specifically interested in the political incorporation and representation of Latino/as, immigrants and women. Her latest research examines how major forces such as technology, the military system and immigration policy impact and are impacted by Latina/o youth. She has worked with organizations such as Texas Rio Grande Legal Aide, La Union del Pueblo Entero, and the South Texas Adult Resource and Training Center.  Dr. Lavariega Monforti has co-authored two books and published over 50 articles and chapters. She has contributed to several news articles and broadcasts including the New York Times, La Opinión, and NPR’s All Things Considered.