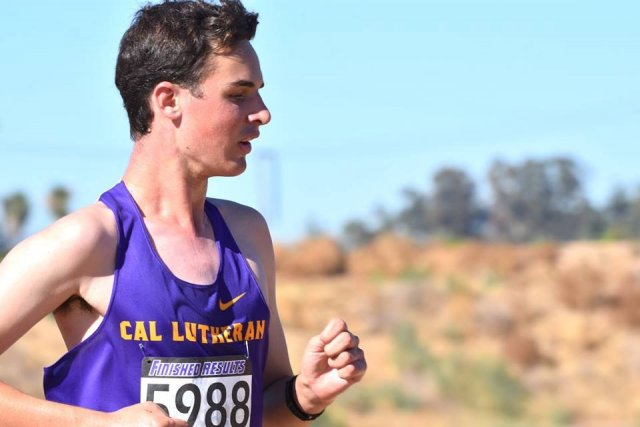 Dillan Barmache runs cross-country for Cal Lutheran because it helps him feel in control of his body.

(THOUSAND OAKS, Calif. – Oct. 1, 2019) Ten nonspeaking people with autism explain how they found their voices through alternative communication methods in a new book edited by the director of the Autism and Communication Center at California Lutheran University.

The authors of “Communication Alternatives in Autism: Perspectives on Typing and Spelling Approaches for the Nonspeaking” include Cal Lutheran student Dillan Barmache of Woodland Hills; California State University, Channel Islands, student Samuel Capozzi of Thousand Oaks; and Ido Kedar of Woodland Hills. The other contributors are Larry Bissonnette and Tracy Thresher of Vermont, Henry Frost and Amy Sequenzia of Florida, Philip Reyes and Emma Zurcher-Long of New York and Rhema Russell of Warsaw, Poland.

The book’s publication will be celebrated Saturday, Oct. 5, at the fourth annual Spectrum of Opportunity conference at Cal Lutheran. Editor Edlyn Peña of Camarillo and eight of the authors will share strategies highlighted in the book with more than 300 autistic self-advocates, family members, educators and professionals.

“Imagine, after decades of silence, discovering your voice without being able to speak,” said Peña, whose son has autism. “Their narratives document the complexities that autistic individuals navigate when choosing to use a highly controversial, alternative form of communication in educational community settings.”

In the book, Thresher, Bissonnette and Sequenzia document their limited opportunities at a time when autistic children were institutionalized and their discoveries as adults of ways to communicate. Chapters by Barmache, Capozzi and Kedar reflect the experiences of a generation of people with autism who had access to full educational inclusion by the time they reached high school and college, but who still faced challenges. The other authors had a range of schooling experiences.

Like many of the authors, Barmache describes the frustration of being stuck repeating lessons that were far too easy because he couldn’t indicate his understanding in his voice or gestures. Later, with the help of a new teacher, he began spelling out words and was able to show what he understood. He moved into more advanced classes and gave a speech at his eighth-grade graduation by typing it into a tablet and letting the computer’s voice speak for him. Now he is in his second year at Cal Lutheran, majoring in psychology. He also runs cross-country because it helps him feel in control of his body. He has received awards for sharing his experiences at schools and conferences and through his blog.

“I am so ready to let the world know that they are all wrong about autism,” Barmache writes in the book. “There are so many of us, and it’s time to listen to our message, include us in all of the decisions that must be made, and share our thoughts with the people who are there to support us in our lives.”