Show features artists and their inspiration 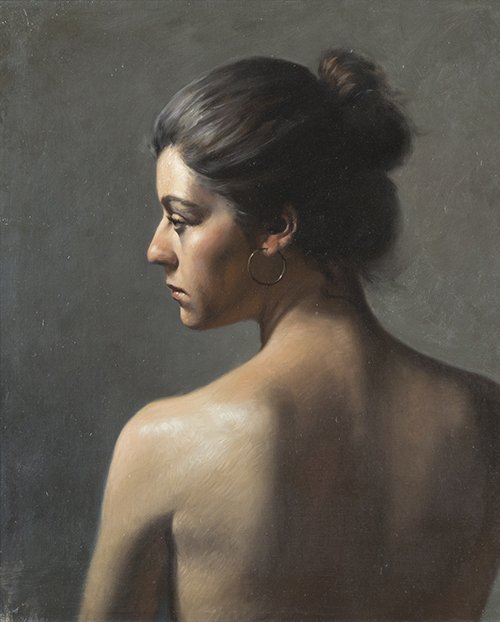 The exhibit includes "Tomara" by Daniel Graves, the founder and director of The Florence Academy of Art.

(THOUSAND OAKS, Calif. – Oct. 12, 2015) An exhibit featuring works by contemporary representational artists and the pre-modern artists who inspired them will run Oct. 30 through Jan. 21 at California Lutheran University.

A reception for “Transmission: Secrets of the Studio” will be held at 5 p.m. Saturday, Nov. 7, in the William Rolland Gallery of Fine Art.

The exhibit highlighting ways artists inspire each other was organized in conjunction with The Representational Art Conference (TRAC) to be held from Nov. 1 through 4 at the Crowne Plaza Ventura Beach. Many of the featured artists are participating in the international conference organized and sponsored by Cal Lutheran.

The exhibit will feature paintings, drawings and sculptures by artists from the United States and Europe. Painter Daniel Graves founded and directs The Florence Academy of Art. Painter F. Scott Hess has works in the Smithsonian Institution, Los Angeles County Museum of Art and other public collections. Mixed-media artist Brad Kunkle of New York City has a concurrent exhibit and residency at the Kwan Fong Gallery of Art and Culture on campus. Internationally celebrated sculptor Richard MacDonald will concurrently exhibit a dozen of his sculptures along a path between the Rolland and Kwan Fong galleries. Norwegian Odd Nerdrum is considered by many as one of the greatest living representational painters. Jon Swihart received commissions to paint portraits of Walter Cronkite, Elizabeth Dole and Jack Lemmon. The paintings and prints of Ruth Weisberg are in several collections including Instituto Nationale per la Grafica in Rome and the Metropolitan Museum of Art. Painter Lea Colie Wight has earned multiple awards from the Portrait Society of America. Other artists include sculptors Lynn Christopher, Alicia Ponzio and Gary Weisman; painters Luke Hillestad, Hüicho Lé, David Molesky and Michael Pearce; and charcoal artist Annie Murphy-Robinson.

Alongside works by these current artists will be those of 16th- and 19th-century predecessors who provided inspiration. These artists are French painter William-Adolphe Bouguereau, Flemish sculptor Giambologna (Jean Boulogne) and French painters and sculptors Alexandre Falguière, Adrien Étienne Gaudez, Jean-Léon Gérôme and Antonin Mercié. The exhibit includes unexplored works and preparatory sketches, many of which are held in private collections, including unpublished letters by Bouguereau and Gérôme.

Michael Pearce, an associate professor of art at Cal Lutheran and co-founder of TRAC, curated the exhibit. Admission is free. The gallery is located in William Rolland Stadium. Hours are 10 a.m. to 4 p.m. Tuesday through Friday and 11 a.m. to 3 p.m. Saturday. For more information, contact Rachel T. Schmid at 805-493-3697 or rollandgallery@callutheran.edu or visit CalLutheran.edu/rolland.