A history class searches for remnants of the Cold War in Thousand Oaks. 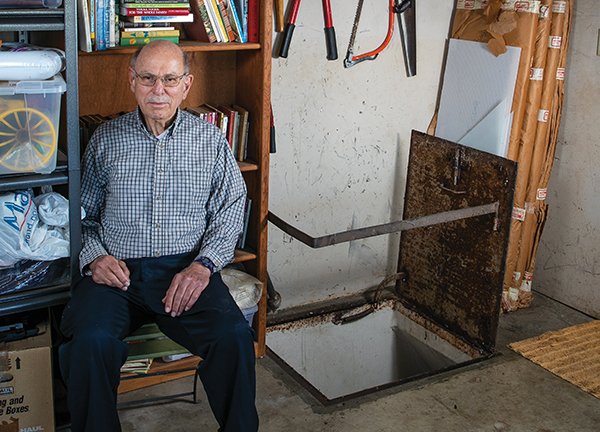 Homeowner Gerald Cline didn’t choose to install a bomb shelter beneath his garage. It was there when he came to Thousand Oaks in 1964. He called history professor Michaela Reaves after seeing an article on her Cold War course, and now has helped her to identify more homes with bunkers.

Flashlights are an unusual study aid for a history class, but they came in handy in a spring 2019 course designed to illuminate one of the darker times in our nation’s past.

Students in the Cold War class taught by Professor Michaela (Crawford ’79) Reaves used two Kennedy-era housing tracts in Thousand Oaks as classrooms. On the outside, the dwellings fit the mold of postwar California ranch homes. But buried beneath some of their garages and backyards are fallout shelters, artifacts of the four fretful decades when the United States and the Soviet Union faced off on the brink of atomic annihilation.

To drive home the anxiety that pervaded this era, Reaves assigned the class to search for these subterranean shelters.

“I wanted them to see them as real,” said Reaves, chair of the History Department, pointing out that her students were born long after the Soviet Union disbanded in 1991, ending the Cold War.

Reaves herself heard tales of these bunkers while growing up in Thousand Oaks in the ’60s. She never entered one, nor did she have much to go on in assessing their prevalence. A 2011 Caltrans report suggested that these neighborhoods had California’s highest concentration of bomb shelters. This calculation was based on reports that 20 out of 26 of the earliest buyers opted to install the shelters.

Marketing by the housing developer played on the anxiety of potential homeowners, she said. Some of them worked in the aerospace industry building weapons of war.

“H-Bomb? Survive,” read a bold headline under an image of a mushroom cloud in a Los Angeles Times ad for the Dales and Sunset Conejo subdivisions. The text cited a claim that 80 percent of citizens could live through a nuclear attack if properly sheltered and labeled these properties “Southern California’s only residential developments with fallout protection.”

Jacob Mansour was one of 20 students who fanned out into the twin tracts on a Saturday morning in early May. Intrigued by this unusual quest, reporters from local media outlets tagged along.

Although his mother was born in Soviet Ukraine, Mansour had scant knowledge of how the Cold War weighed on the psyches of ordinary people on either side of the conflict.

“If you asked me before this class which was more dangerous, World War II or the Cold War, I would have said World War II,” but his surreal experience on the hunt for bomb shelters had him rethinking that, the sophomore said.

Early in the day, Mansour and his cohorts interviewed a couple whose home apparently lacked a bunker but who offered insight into the fears of the early ’60s.

“They said even if they had one they wouldn’t tell us,” said the political science and theater arts major.

This wariness, as they explained, sprang from a 1961 episode of The Twilight Zone about a group of people who are convinced that a nuclear attack is imminent. The fictional TV drama showed panicked birthday party guests beating down the door of the host’s fallout shelter, rendering it useless for survival.

“It was paranoia I didn’t understand,” said Mansour, who was born a decade after the Berlin Wall toppled.

Eventually the students hit pay dirt, as homeowner Adrienne Cope invited them to explore the shelter beneath her garage. Mansour lifted the heavy steel trapdoor and descended a
narrow wooden ladder in a metal-lined shaft that led 10 feet underground.

The 8-by-10-foot domed vault smelled musty and felt dirty and dank. Mansour noted a decided lack of creature comforts. There was a crank to open an air vent and a faucet. But there was no toilet, beds or stove. And scant elbow room.

At an estate sale for an original owner in the subdivision, Gina Halweg ’89 Alexander saw plans from the developer on how to make the shelter more accommodating, such as installing bunkbeds. She bought a home 30 years ago with a stripped-down backyard shelter.

The original buyer of her home, who had been a psychiatrist at an internment camp detaining Japanese Americans during World War II, married a Japanese woman. Because the United States had dropped A-bombs on Japan, killing or wounding at least 250,000 people, the couple may have felt the threat of nuclear attack more acutely, Halweg Alexander said.

She has climbed down the ladder into her shelter but has never stood in it due to a spider infestation. Her son and his buddies cleaned, painted and carpeted at one point to turn it into a “man cave” before abandoning the plan.

And with good reason. Within just a few minutes of entering the shelter in Cope’s home with his two classmates and a news reporter, Mansour began questioning whether anyone would want to survive a nuclear blast.

The pit heated up quickly with four people inside and became clammy and close. “This is a worst-case scenario,” Trevor Kierstead ’19 told a reporter for Spectrum News 1.

Mansour agreed. “I think I’d rather die quickly. I’m not going to sit down here for months at a time,” he said.

Cope, an elementary school teacher, was pleased the students visited her shelter as part of a class project.

“I think it’s a piece of our history, an artifact. It’s antiquated but it tells about a time when it had a practical purpose,” said Cope, who first entered the shelter just a few weeks before the students knocked on her door.

The experience, Mansour said, provided insights that no textbook could: “It made history a whole lot more important.”