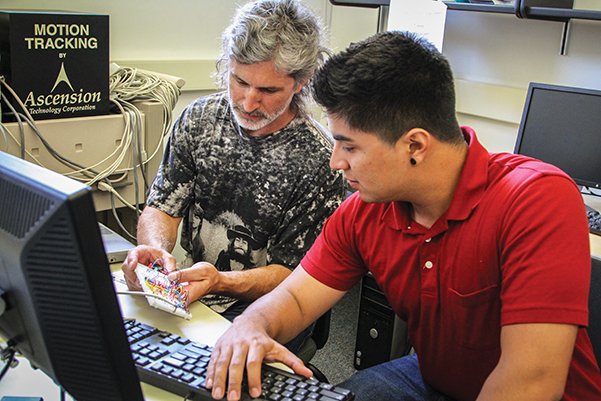 One of the university’s selling points is the low student-faculty ratio, which stands at 15 to 1. As a first-generation college applicant, Sal Brito ’16 didn’t receive a lot of guidance on how to pick a school, but he knew to watch that number. It was the main reason the Oxnard native chose Cal Lutheran.

But what does the number mean? Beyond smaller average class sizes, the low student-faculty ratio affords students more ways to find out and to get experience in what they love doing and, crucially for Brito, more attention from potential advisers and mentors. After being approached by chemistry professor Grady Hanrahan, he became the only freshman in a small lab environment with three other students.

“At the time, I had really no idea what research was,” said Brito, who is in his fourth year of the neuroscience PhD program at Harvard University. “I thank [Hanrahan] a lot because it was his initiative to get me in his lab and just get my feet wet about what science really was.”

Although alumni from any program at Cal Lutheran could shed light on mentorship, for this article we spoke with a few very recent graduates who have gone on to doctoral programs in the biological sciences and allied fields.

When Yasi Mojab ’19 immigrated to the United States at age 11, she spoke only Persian and needed her father’s aid to read her new school textbooks. Somehow, she managed to make the seventh grade honor roll in her first semester.

Donovan Argueta ’14 was about 7 or 8 when a secondhand microscope and some old slides caught his eye. His parents made the nonessential purchase because of the curiosity he showed, and he remembers the microscope as one of the things that set him on his path in life. Even though Argueta’s parents hadn’t been able to pursue higher education, they never left a doubt that their children could.

Before college, Emily Armbruster ’19 was a product of schooling primarily by her mother in her Simi Valley home. She has been “interested in science, specifically biology, since I can remember,” beginning with books on germs and microbiology that her mother read to her and her younger sisters.

Brito remembers how his parents sheltered him from their economic worries, letting him focus on school. They pushed him until he took responsibility for his own academic success in middle and high school, where a psychology class sparked his fascination with the brain.

All of these formative experiences, in which education was one product of caring, find echoes in mentoring relationships. Rather than attempt to pass along their projects and research questions, strong mentors, like parents, listen well and give younger people room to invent and to raise their own.

Mentoring is a team sport, or a relay

Young college students travel rapid intellectual arcs as they begin to grasp complex problems and discover which ones, for them, make study worthwhile. Armbruster recalls how her professors both deepened her understanding of biology and caused her to see where it intersected the public good. She had courses with Jason Kingsbury, Theresa Rogers, Chad Barber and others, and Paloma Vargas stood out as both a teacher and life mentor.

“My time in Dr. Paloma Vargas’ emerging infectious diseases class gave me some insight into the connection between biology and public health and global politics. They’re interconnected in a way I didn’t appreciate before. That inspired me to stay in this field,” said the biology graduate, now in the biological sciences PhD program at UC San Diego.

Before college, Mojab had taken exactly one biology course and did not picture herself pursuing a doctorate “at all.” But late in the second semester of organic chemistry with Kingsbury, she became fascinated with the molecular structures of drugs, how they interact with enzymes and other molecules, and how different configurations even of the same molecule can produce drastic side effects. “That was the moment that I considered pharmacy as a career,” she said.

In the lab of her mentor, biochemist and molecular biologist Kate Hoffmann, Mojab learned about drug design based on atomic-level structures and felt profoundly reassured of her choice. “After that research, I was sure I wanted to do this,” she said. She also found the confidence to create a path of her own. She minored in art, took on a second major in chemistry, did an independent study with David Marcey about macromolecular structures, and relied on her support network to get through stressful graduate applications. Now, she has started the University of Southern California’s doctoral program in pharmacy.

Partly because Cal Lutheran didn’t offer neuroscience as a major, Brito also ended up fashioning his own course of study, finally graduating with a BS in biology and BA in psychology. All the while, his work in laboratories moved ahead on a parallel track. The subject matter of laboratory work with Hanrahan and then Dennis Revie, an expert in infectious diseases who has since retired, was always interesting to him, but not the main thing. “What helped me ultimately was the experience itself, knowing what a lab environment was like,” he said.

Argueta credits a single faculty member, Craig Reinhart of computer science and bioengineering, with motivating him to go on to graduate school. As a first-generation college student, he also found a support system that included Elena Jaloma ’03, MS ’08, MPPA ’15, now the director of Student Support Services, and Sergio Galvez ’03, MPPA ’09, the senior director of programs including Upward Bound, where Argueta worked one of his college jobs. Jaloma and Galvez “were pretty big in helping me see what other options there were past college,” he said. “It’s easy to get stuck in just a college mindset.”

Argueta this year finished his PhD in bioengineering at UC Riverside, on schedule, and moved on to postdoctoral work at UC Irvine. An expert in the endocannabinoid system and in making assays to show how it works, he has investigated the causes of obesity and, more recently, pain management for people with sickle-cell disease. The most common genetic disorder, sickle-cell affects Hispanics more than once thought and is under-treated, Argueta said. Chemicals already produced by the body have a potential to make it more bearable, he said.

Armbruster feels “drawn toward academia” partly because of the chance to mentor others. She had her first such experience as a tutor in Cal Lutheran’s ALLIES in STEM program. “I would love to be able to mentor students and push them to really chase their aspirations the way I had professors doing for me.”

Since starting his program at Harvard, Brito has taken some formal and informal opportunities to mentor. “Drs. Hanrahan and Revie approached me, and that has guided me to emulate them and basically be like them to others,” he said. “Reaching out to people who I think may need help and asking what their interests are – that is a big component.”