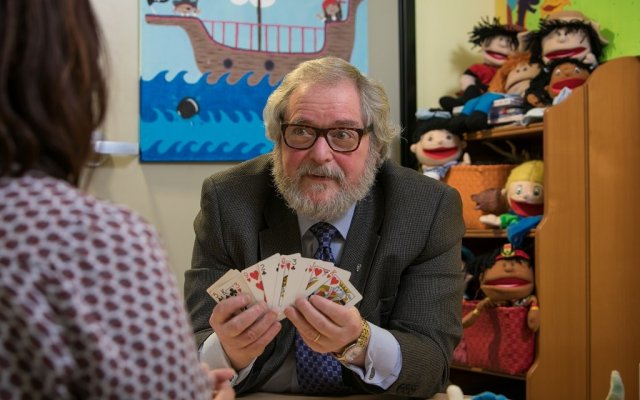 Michael Gerson is teaching the next generation of psychologists how to use sleight-of-hand illusions to connect, or form therapeutic alliances, with children.

Psychologist Michael Gerson, an associate professor in the California Lutheran University Graduate School of Psychology, has spent more than 40 years providing psychotherapy for children who have been abused.

Eight years ago, when Gerson started taking magic lessons he had received for Father’s Day, he thought back to how he felt as a child learning the simple tricks that were taught at the end of the Saturday morning TV show "The Magic Land of Allakazam" with Mark Wilson, and wondered if he might have a new tool to help his young clients.

“I have always remembered how empowering it felt to know something that even my parents and older brother didn’t know,” recalled Gerson. “I quickly realized that it could be incorporated into working with kids as a way of stimulating their curiosity and enhancing their sense of mastery.”

Gerson studied close-up magic, which is done with objects such as cards and coins, and spent three years becoming a member of the Academy of Magical Arts’ Magic Castle.

He began incorporating magic into his private practice work with children. At Cal Lutheran, he began teaching the next generation of psychologists how to use sleight-of-hand illusions to connect, or form therapeutic alliances, with children.

“I have found that an activity that is intriguing and unusual can be a good beginning for forming the trusting relationship necessary for psychotherapy to be successful,” said Gerson. “I choose magic examples that are easily learnable so that they can be taught to the child if they want to know how to perform them.”

The Westlake Village resident began researching other ways that magic may help people. For the last three years, he and his students have conducted studies on whether it can be used to encourage social interactions among young adults with autism or social anxiety. This fall, he will spend his sabbatical finishing a paper on the initial findings that will be submitted for publication in a scientific journal. Gerson is also writing a theoretical paper on the psychology of magic as it relates to experiences of enchantment, optimism and social connectedness.

Like magic, psychology first attracted Gerson’s attention as a child.

“My interest in psychology goes back to when I first read about it in the encyclopedia when I was about 10,” he said. “I witnessed a fair amount of human suffering by my parents and other family members and was interested in trying to understand what was going on and how to survive it. Reading psychology books continuously from junior high school on was a form of therapy for myself.”

Gerson, who earned a doctorate in psychology and psychoanalysis from California Graduate Institute, has put his knowledge and training to work serving troubled youths and families in a variety of ways since 1974. He began working with juvenile gangs for the Los Angeles County Probation Department and then transitioned into domestic violence work. In 1977, he entered into community mental health and specialized in family and child therapy. He has testified as an expert witness in child abuse and domestic violence cases. He has served on the L.A. County Commission on Violence Against Women and the Preschool-Age Molested Children’s Professional Group for the L.A. County Department of Mental Health and has been a consultant to the L.A. County Child Abuse Task Force and an evaluator for the California Department of Mental Health.

“Working with violent offenders and abused children, who are often one and the same, is both challenging and emotionally draining. The rewards, however, are enormous when I learn that I have been helpful in their survival and recovery,” Gerson said. “The tragic lives of many of those patients is a reminder of the power of human resilience and the capacity of one person to help foster another person’s healing.”

Gerson is a licensed psychologist, psychoanalyst and marriage and family therapist. He began a private practice in 1981 and still sees a limited number of clients. Whether or not magic plays a role in the process, he does his best to help people understand and gain control of unclear situations.

“In some ways, it is like being immersed in a complex mystery that unfolds weekly and which we can rewrite together.”