The losses at tennis did not go to waste

Ventura County Superior Court Judge Ronda McKaig came to trust her own abilities during college, and not first of all in the classroom. 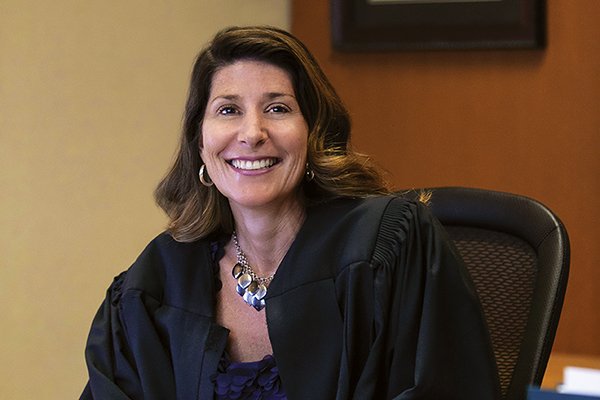 Hours into a packed docket of misdemeanor and DUI cases on a recent afternoon, Superior Court Judge Ronda McKaig ’94 listened as a defendant declared herself unable to afford fines for a minor traffic infraction. The penalties piled up after she failed to appear on a previous date because she was in the hospital, she told the judge.

As the bailiff handed the weeping woman a tissue, the soft-spoken McKaig reduced the amount owed.

Mercy, observes Shakespeare’s Portia, blesses those who give it and those who take it. Since the consequences are not certain, the granting of mercy requires a high degree of self-confidence.

“Giving second chances can have disasters, but when I don’t think there is risk, I try to find a way,” McKaig said.

This summer, Gov. Jerry Brown appointed the 45-year-old Cal Lutheran political science graduate and Loyola Law School alumna to the bench at the Ventura Hall of Justice. This high responsibility is given to few. Of more than 168,700 licensed attorneys in California, just over 1,500 are selected as judges for the state’s superior courts.

Of all the lessons McKaig learned at Cal Lutheran, belief in herself may have been the toughest and most enduring.

During her girlhood in Santa Paula, no one doubted she was destined for high achievement, said civic activist and businessman John Nichols. She raised prize pigs in 4-H, made the cheerleading squad and argued for Santa Paula High in the county’s mock trial competition, earning the best prosecutor honor in her senior year.

Perhaps she had cause to doubt herself in collegiate tennis, not having played the sport in high school. But that was the arena where she clearly recalls learning to trust her abilities. McKaig credits coach Carla DuPuis, whom she recalls as “a little firecracker,” with imparting that lesson.

DuPuis assessed the freshman this way: She was tall and strong, could hit the ball, but was afraid of winning – not just on the court but in life.

DuPuis made the rookie player challenge that mindset. The Regals had just one conference win in her first season, but for McKaig it outweighed the defeats. By her senior year she won a team honor for most inspirational player.

McKaig cast about for five years between Cal Lutheran and law school, working in the IT department at Boeing and feeling unfulfilled and “fairly miserable.” But upon graduation from Loyola, she passed California’s bar exam on her first try. Suddenly, the girl from a farming town was enmeshed in fast-paced, high-dollar cases where she had to “bend, change, mess up and accept criticism.”

After litigating securities cases, she shifted into white-collar crime defense. “It was easier to devote myself to fighting for someone’s liberty,” she said.

Five years ago, she won a statewide award for her successful pro bono defense of Planned Parenthood against a complaint seeking damages of more than $600 million.

In 2014, she and her husband left the lights and bustle of Hollywood and moved back to Santa Paula to raise their two sons. Her new boss, Ventura County Counsel Leroy Smith, initially worried she might not fit in after litigating high-profile cases. His qualms quickly faded.

“What made her stand out was her collegiality. She came in as a team player, very humble and willing to contribute,” he said.

One day she might be arguing a constitutional case in front of the U.S. Ninth Circuit Court of Appeals and the next she’s defending a dog catcher, Smith said.

At the urging of local jurists, McKaig applied to fill an opening on the Ventura County Superior Court, a grueling process that begins with a 40-page application. She submitted the names of every judge and opposing litigator she had encountered. The local bar association and, ultimately, the governor’s judicial appointment staff interviewed her to assess her fitness.

Almost a year after applying, she received the happy news in July. McKaig left the County Counsel’s Office on a Friday and the following Monday donned a black robe to preside over one of the county’s busier courtrooms.

To keep her seat after her current term expires in two years, McKaig must place her name on the ballot. Registered without party preference, she lacks experience in the political rough and tumble.

“Don’t let her politeness fool you,” said Smith, the former boss. “She is very tough. You can’t intimidate her because she is always prepared.”

“She made me challenge the belief that I didn’t deserve to win,” McKaig said. “That is the magic of CLU.”