Voyage to Phobos, moon of Mars!

Under constant watch, a crew of four navigates space from Houston. Will Rod Borgie '93 conquer fear and the unknown? 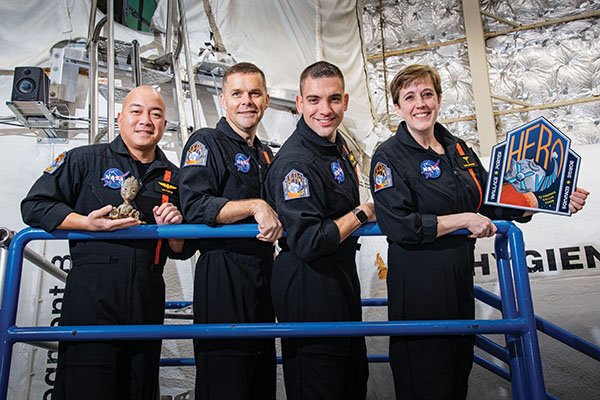 Compared with previous missions aboard the mock spacecraft at Johnson Space Center in Houston, HERA 18 allowed its crew less privacy and less free working space. Rod Borgie ’93 is second from the left.

A Mars mission could take astronauts three years or longer, with the outbound and return flights of about nine months each. Navy Capt. Rod Borgie ’93, MD, a flight surgeon and pilot, would gladly give the time to NASA, hanging his laundry in the hygiene unit, hydrating his meals with a syringe, and fulfilling a lifelong fantasy of going into space. The neuroradiologist made the final 450 of more than 18,000 astro-aspirants. He’s not finished with this at age 48. He’ll try again.

Through a separate NASA application process, the San Diego native and Naval Base Coronado officer recently won the chance to contribute to space exploration and to scratch his starperson itch. The space agency judged him to have the right stuff for a 45-day simulated mission to Phobos, the larger of Mars’ two moons, that played out entirely inside Houston’s Johnson Space Center.

Along with three crewmates, Borgie took up residence in the Human Exploration Research Analog (HERA) on Feb. 15, behind schedule due to the federal government shutdown, and emerged on April Fools’ Day.

Rather than the expanse of space, HERA missions explore human limitation, including team dynamics, conflict resolution and the effects of confinement on the body. Although crew members conduct their own experiments, growing hydroponic lettuce and triops shrimp on mission No. 18, they are conscious of their role as the primary research subjects under observation, as they leave behind family and friends. Borgie is married with a boy and girl in high school and another son in elementary school.

For the first mission in HERA campaign 5, privacy was hard to come by. There were no separate sleeping quarters, no door on the hygiene unit, and nowhere to hide from the cameras – except for the toilet, the shower and Borgie’s weekly call to his family from the airlock. Luckily for the crew members, there was also no sleep deprivation study this time and no collection of stool samples; they took their own urine, blood and saliva.

Challenges included setting the humidity for the right balance between dry, raspy throats and too much wet laundry. Sleep was surprisingly easy. Without any way to replicate weightlessness on the ground, crew members climbed into beds instead of upright restraints. “I slept more than I do at home,” Borgie said. Otherwise, they simulated space flight as closely as possible during 16-hour workdays, to the point of changing out cannisters of carbon dioxide scrubbers that weren’t really needed on the ground, and holding for messages to and from mission control, with the delays growing longer the farther their capsule was supposed to be from Earth.

Like an unscripted TV show set in a tiny, three-story house, the 45-day mission was an intensive test of roommate compatibility. Stays in HERA started at seven days in 2014, then crept up to 14 and 30 days in length before settling at 45, which is sufficiently long for fissures in group cohesion to show, Borgie explained.

Before boarding, the three men and one woman had about two weeks to get acquainted and finish team-building tasks. They had already designed an official patch for the mission. Borgie was put in charge of the crew’s custom uniforms, which ended up black with a burnt orange stripe. Finally, they produced a mascot on a 3-D printer, a statuette of Groot from the Guardians of the Galaxy films.

Inside the closed habitat, the crew kept the atmosphere light, turning the assignment of chores into a game. You could call dibs on dishes first thing in the morning. Another morning ritual was to wish Borgie happy birthday, since the date, his secret, would fall sometime within the mission. (The oldest crew member, he had everyone watching DVD episodes of Cheers over lunches.) After digesting the day’s electronic Houston Chronicle, the crew submitted predictions on March Madness college basketball games to mission control.

This spirit of fun, shared by all, was something that Borgie has used since his Cal Lutheran days to relieve stress. During college, a core group of roommates including Kevin Charlston ’93, Mike Clarke ’93, Eric Rutlin ’93 and Eric Weeden, who finished college elsewhere, made a jar of Skippy brand peanut butter into its mascot. The peanut butter traveled to Oregon and Japan at milestones in their lives. On his wedding night in 1995, Borgie found it in his San Diego hotel suite.

“Throughout, humor has been a big part of our lives,” he said. “It helped mitigate the stresses of living together. The same principles have carried me through for 25 years and even to NASA.”

Joking aside, the HERA mission 18 crewmates openly aired and addressed interpersonal issues. They stored up positive comments about one another to recall later. It helped communication that three of them were medical professionals and that all had military backgrounds, Borgie said. They continue to trade memes on a group chat that they started after being introduced last Thanksgiving.

Borgie’s Navy flight training, which he received partly to flesh out an aerospace medicine specialty focusing on pilots, culminated in landing a McDonnell Douglas T-45 on a carrier at sea, the day he won his wings of gold. But it was his next flight, the return to base, that stands out in his memory. For one fine moment, the trip felt a bit like solo space exploration.

“I remember just getting to be where the carrier’s behind you, it’s gone, it’s out of sight, and the land’s not in front of you yet. You just have your instruments, but you’re just flying about 500 feet over the ocean, the water, just alone,” he said. “It’s like, ‘This is awesome!’”

He was also airborne when he got the call from his wife, Dr. Suzann K. Pia, a pediatrician, announcing her pregnancy with their second child, Emma. Subsequently, he qualified to fly the S-3B Viking based in San Diego, making day and night carrier landings, and was an instructor pilot in addition to the squadron’s flight surgeon.

A Lutheran preacher’s kid without many family members in the military, Borgie gained the confidence for these pursuits at Cal Lutheran. He came with scholarships covering his tuition, a little sorry not to continue with lacrosse. Instead, he enjoyed club rugby and even went out for track, finding himself at meets next to towering athletes from larger schools. He was elected president of the senior class, and the biology program propelled him to medical school on the first try.

Deciding on the Uniformed Services University in Maryland was a “leap of faith,” he said. A seven-year commitment to the military would pay for medical school and could help him become a pilot and astronaut. He met his wife there, too.

Borgie’s experiences have convinced him that studying STEM offers the greatest range of opportunities for work “outside of the box” of a 9-to-5 schedule. “Take a chance,” he tells his daughter, who is strong in math. “Take a risk to fail. It will pay dividends.”

On the HERA mission, he was evaluated on his control of the Canadarm within the same simulator used to train International Space Station astronauts. The team worked together to execute a Martian moon landing.

“It was fun to do (the mission), but when you come back you realize how much fun you have being involved in your kids’ activities,” he said. “I think my wife was glad to have me back to get stuff done around the house.”

Borgie has orders to become the force surgeon of Commander Naval Air Forces Reserve with the opportunity for continued flying and adventure.