The illusionist and onetime marketing major has embarked on a nationwide tour, the most ambitious phase of his career in confounding the senses and transforming the world for audiences. 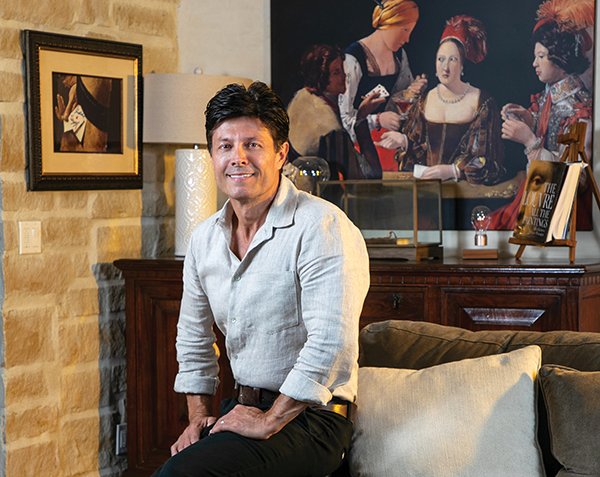 The Card Sharp with the Ace of Diamonds, a 17th-century painting by Georges de La Tour now in the Louvre, has a place in Ivan Amodei’s home and his currently touring magic show.

While in college, Ivan Amodei ’92 had a job waiting tables in Thousand Oaks at the Velvet Turtle, a now-defunct fine dining chain. Amodei and his fellow student waiters made a pact: “We all decided when we graduated college we were going to quit,” he said. “I thought it would be too easy to stay. A lot of people with degrees did stay and wait tables.”

The marketing major left the restaurant as promised and went looking for work, until it dawned on him that none of the jobs on offer were better than the one he still had: magic.

Amodei started practicing card tricks and other illusions when he was around 5 years old, and by the time he finished college he was performing at the Magic Castle in Hollywood and working parties.

“Just fooling around with my magic, doing corporate events, I was making more money than some of these corporate jobs I was interviewing for,” Amodei said. “I thought, ‘I don’t have a family, I don’t have kids. Nobody’s going to starve except me if I fail, so I might as well give this a whirl.’”

Twenty-seven years later, Amodei is in a small class of entertainers: a professional stage magician who tours the country playing before crowds of hundreds or even thousands. In 2016, he appeared on “Penn & Teller: Fool Us” and fooled the famous hosts, with a trick that is still a part of his act. Amodei debuted his new show, “Secrets & Illusions,” in the summer of 2019 and started a nationwide tour in September that will last into 2020.

There is a large worldwide community of magicians, but most are hobbyists or part-timers, said Michael Gerson, an associate professor of graduate psychology at Cal Lutheran and an amateur magician himself, though he’s never met Amodei or seen him perform.

Gerson studies the use of magic in therapy, and has a paper under review at a psychology journal on magic’s potential as an intervention tactic for children on the autism spectrum.

“Magic really pushes the limits of our thinking,” he said. “We’re using our normal senses to try to understand an experience, and it fools us; our senses fall short. There are limits or contradictions to the information we take in through our sense. From a psychological point of view, it’s important because it makes us question how we know things. It makes us reflect on our sense of certainty about the world.”

In a way, it’s remarkable that stage magic like Amodei’s retains its appeal, Gerson said, since in the world of 2019 we can watch seamless digital illusions in movies and immerse ourselves in fantasy worlds through video games.

The distinct appeal of watching and pulling off live illusions was something Amodei understood as a child. He now lives with his wife and their 13-year-old twins in the Somis area, north of Camarillo, California, on a property that includes a 30-acre lemon orchard.

He was born in a small town in Sicily and moved to New York City at the age of 2, when his parents and his uncle, all hairdressers, opened their own salon. When he was about 5 years old, his parents had a party, and one of the guests performed a few magic tricks. Amodei was hooked. He found a magic shop in his Brooklyn neighborhood, and the owner taught him card and coin tricks and let him read books on tricks and techniques. Before long, he was demonstrating magic for the customers.

When Amodei was a teenager, his family moved to Scottsdale, Arizona, and then to California. He attended Thousand Oaks High School, went to work at the Velvet Turtle, and moved out on his own after his parents divorced. He took a year off after high school and enrolled at Cal Lutheran.

“I lived in an apartment right around the corner from campus,” Amodei said. “I made a lot of friends there and I really loved it.”

With the goal of becoming a plastic surgeon, he started college as a pre-med student. But as he soaked up more magic and hung out at the Magic Castle, he found himself less interested in medicine. After graduating with a marketing degree, he made that fateful decision to pursue magic, without a mentor to guide him or even a model for his style.

“There wasn’t YouTube or anything when I was a kid. I didn’t have a lot of access to magicians. The magic store was my biggest access,” Amodei said. “When I was a teenager, David Copperfield was on TV, and that was about it. I don’t think there was anybody specifically who taught me. It was kind of a self-led journey.”

In contrast to the crowds who buy tickets to see him, he did most of his magic early in his career for people who had no idea who he was: salespeople at a corporate retreat, or guests at a wedding. He had to perfect his technique, and he had to learn how to win a crowd.

“Those are the toughest crowds, the crowds where the one person who hired you for the event is excited, but nobody else really cares,” he said. “I had to have my skills in all different aspects of magic, because you never know what’s going to happen. … How do you get 300 people who aren’t interested in you to be interested in you? You have about 10 seconds to get their attention. It’s almost like street performing.”

Amodei started to create his own act and take it on tour. At first, he said, his magic wasn’t much more than sleight-of-hand tricks: “I’m going to change the ball from red to blue; I’m going to make the coin disappear.”

But 13 years ago, after his children were born, his act changed. He started trying to build illusions with meaning. His new show has a theme, which he sums up onstage in an aphorism that is frequently, though incorrectly, attributed to Mark Twain: “The two most important days of your life are the day you were born, and the day you find out why.”

His illusions connect people in the audience to one another, urge them to face their fears, and remind them of the importance of spending time with loved ones.

“Everything has some sort of humanitarian message, and it’s deliberate in a lighthearted way, so you don’t feel like it’s preaching to you,” he said.

In one trick, Amodei plays a version of Russian roulette with a large hunting knife, hiding the knife under one of six identical paper bags and inviting a volunteer to join him in smashing their hands down onto one bag after another.

“That’s about facing your fears,” he said. “If you can face this one little thing on stage in front of a thousand people, you can do bigger and better things in your life. You’d be surprised how many people get up on stage and say, ‘I am not doing this.’ They know I’m not going to kill them on stage, but it’s just too real for them right now.”

The audience is an essential part of nearly every illusion Amodei performs. He tosses a beach ball into the crowd at the start of his show, and whoever is holding it becomes one of his semi-voluntary volunteers. The volunteers don’t just pick a card or guess a number. They often tell their stories to Amodei, and he incorporates those stories into the illusions.

The interactivity keeps the show fresh; even Amodei is never sure exactly how each night is going to play out.

“It makes it much more immersive. You really have to pay attention if you might be called on stage at any moment,” he said. “I wish I could say I planned it that way, but it just evolved. I started to notice that the more I allowed the audience to participate, the better the energy was.”

Amodei’s goal is not just to elicit a gasp or a round of applause. He wants people to wake up the next morning thinking and talking about what they saw at the theater.

It’s that ability for an illusion to stick in the brain that separates “doing a trick” from “creating magic,” said Gerson, the Cal Lutheran psychology professor and amateur magician.

“A trick is something that fools our senses or expectations, but turning that into something that’s magical is a transformation of reality for the moment, so the person is left in a sense of wonderment and excitement that in a lot of ways brings us back to our childhood, where we view the world in exciting and mysterious ways,” Gerson said.

Gerson teaches his graduate psychology students at Cal Lutheran a few magic tricks they can do with children, to help their young patients relax and acclimate to a therapy session. The students have a sense of childlike wonder when they’re first shown the trick that tends to dissolve when they’re shown how it’s done.

For Amodei, a sense of wonder persists 45 years after he saw his first magic tricks and started to delve into their secrets. He’s someone who figured out early in life why he was born.

“I don’t know if I’ve arrived exactly, but I’m doing what I really love to, and I’m going to keep doing it,” he said.

Tony Biasotti is a freelance journalist who lives in Ventura. His work has appeared in the Washington Post, Columbia Journalism Review, Ventura County Star and Pacific Coast Business Times.