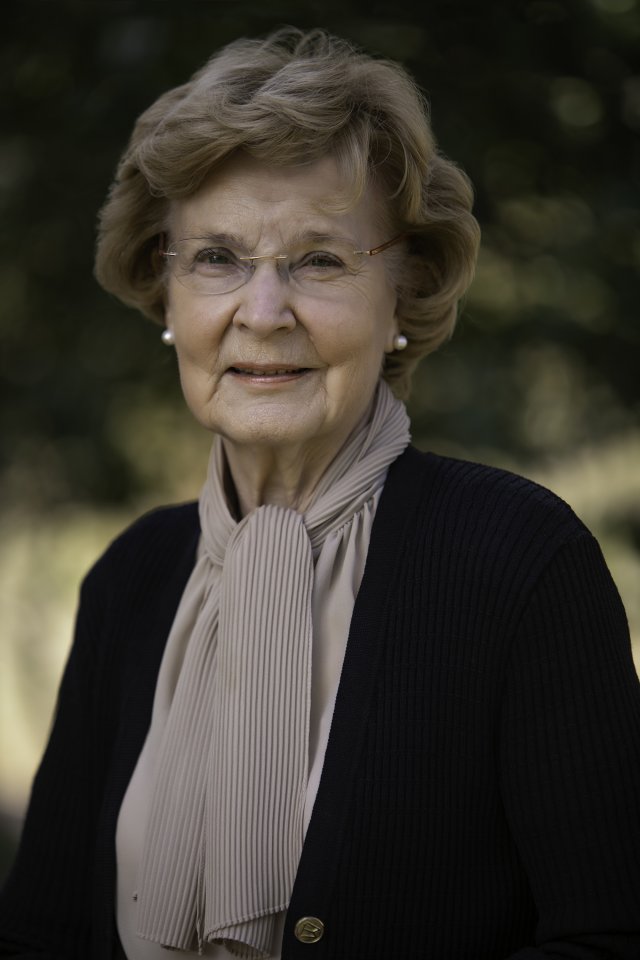 In 1957, Siri Eliason and her husband moved from Sweden to Los Angeles, where they developed Scandiline Industries, a furniture manufacturing company with factories in the U.S. and Europe. Photo: Brian Stethem

“Siri was a woman of uncommon grace, business acumen and diplomacy,” said former Cal Lutheran President Luther Luedtke. “She was a major figure in Swedish-American relations regionally and nationally and took great pride in both her Swedish heritage and American citizenship. We are grateful for her life and friendship.”

In 1957, Eliason and her husband, Sven, moved from Sweden to Los Angeles, where they developed Scandiline Industries, a furniture manufacturing company with factories in the U.S. and Europe. Eliason also built up her own business, Danica Inc., a chain of stores selling mainly Scandinavian furniture. In 1984, the Eliasons moved to San Francisco when Sven was appointed Sweden’s honorary consul general for Northern California. Following his unexpected death in 1985, she succeeded him for 14 years.

Born Siri Siljemo in Sweden’s northern Angermanland province, Eliason was an enthusiastic representative and supporter of Swedish and Scandinavian culture. She held leadership positions with the American Scandinavian Foundation, the Swedish-American Chamber of Commerce, the Swedish Women’s Educational Association (SWEA), the Swedish Seaman’s Church and other organizations. She served as director of Scandinavia Today, a major cultural project in Los Angeles.

Eliason was recognized for her contributions by King Carl XVI Gustaf of Sweden with the Royal Order of the Polar Star in 1978 and by the National Ethnic Coalition with the Ellis Island Award in 1984. In 1993, the Swedish American Chamber of Commerce of Los Angeles gave her the Eliason Award, a distinction created in memory of her late husband, and, in 1996, the Vasa Order of America named her Swedish-American of the Year.

As a regent of Cal Lutheran from 1994 to 2003, Eliason celebrated and strengthened the university’s ties to the Scandinavian community through the Scandinavian Cultural Center, the annual Scandinavian Festival and Nordic Spirit Symposium and other activities. As chair of the board from 1999 to 2002, Eliason promoted strategic planning and a $93 million capital campaign that funded new academic and athletic facilities, programs, professorships, and scholarships. She also supported the sale of land for the 500-resident continuing care retirement community University Village Thousand Oaks. In recent years, as a resident of University Village, Eliason maintained close ties to the university, often attending Board of Regents meetings as a regent emerita. In recognition of her service to Cal Lutheran, she was awarded the Exemplar Medallion in 1986 and an Honorary Alumni Award in 2018.

Eliason is survived by her only daughter, Jane Eliason of Thousand Oaks, and sister Anita Siljemo of Stockholm, Sweden.

A memorial service will be held at 1:30 p.m. Jan. 9 in Samuelson Chapel on the Cal Lutheran campus in Thousand Oaks. Donations may be made in her memory to SWEA International via SWEA.org or P.O. Box 4128, Fort Lauderdale, Florida 33338 and to the Sven and Siri Eliason Scholarship via CalLutheran.edu/memorialgift or 60 W. Olsen Road #1625, Thousand Oaks, CA 91360. For more information, email stewardship@callutheran.edu.