Jen LaMoure '09, crime analysis unit manager, has made her mark in cellular analytics. 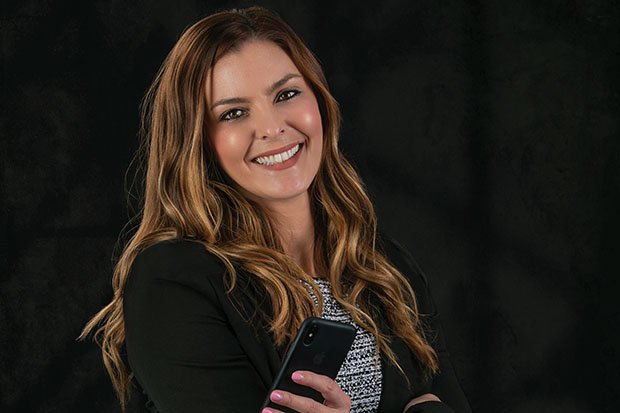 Robberies are her favorite. When she was a new crime analyst for the Ventura County Sheriff’s Office, Jen LaMoure ’09 tracked vehicle thefts and sex crimes. She moved on to robberies and saw that they were small in number, locally, and serial in nature. One person would hit coffee houses, and another “with a very distinct M.O.” held up gas stations for cigarettes and lotto tickets. Within weeks or months, the sheriff’s office closed nearly all of her cases.

Since offenders do not respect jurisdictional boundaries, LaMoure has been able to help end crime sprees affecting people throughout California and across the nation. These days, she said, solving a case usually takes at least one police investigator who thinks like a cop and one analyst who knows data sets and has an eye for patterns.

Let’s say pharmacies are being robbed. Well, which ones? Is it a major chain or “all the mom and pop shops?” asks LaMoure. “Or maybe it’s all the ones that are facing a certain way on the street. Or they’re a certain distance away from the freeway exit. Or in a strip mall.” Today, questions like these can be refined and answered more rapidly than ever, with the rise of open source data and the growth in LaMoure’s desk-bound brand of police work.

Possibly the first Ventura County crime analyst to specialize in the subfield, LaMoure has made her mark in cellular analytics, which typically involves the use of phone company call records to place a cellular handset at a certain time and location. She helped to establish a cellular analytics training program and has taken her expertise to national conferences.

“I became infatuated with it. It was my favorite thing in the world to look at and to do,” she said. “When you got the data, it was a puzzle to undo it, but once you undid it, it was right there. The numbers don’t lie.”

LaMoure now runs the 15-person crime analysis unit at the sheriff’s office. It’s her dream job, and one that she knew nothing about upon entering Cal Lutheran as a criminal justice major. At that time, she appreciated the community benefits of law enforcement and also knew she did not want to carry handcuffs or a gun. After graduation, she earned a Master of Advanced Study in criminology, law and society from UC Irvine and state certification in crime and intelligence analysis.

For the second time this semester, LaMoure is teaching a Cal Lutheran course that was developed at the suggestion of her former professor and mentor Helen Lim.

Criminal justice and criminology majors in the course hardly ever, at first, want to be crime analysts, LaMoure says. They aspire to become police officers, lawyers and federal agents. They want to work investigations as detectives or in forensics. On the first evening of class, some of them expect Crime Analysis to be “like NCIS or Forensic Files.”

But by the end, LaMoure will have a line of would-be interns and a classroom of people prepared to see police work through different eyes. Lisa Alvarado ’01, Sarah Dawoodjee ’17, Abbigael Howard ’18 and Jordan Kessler ’18 all work in her sheriff’s office unit.

LaMoure enjoys “engaging with people who don’t really know about crime analysis. Sometimes they see something that people who look at it every day miss.”