Growing numbers of people are enrolling in post-traditional programs 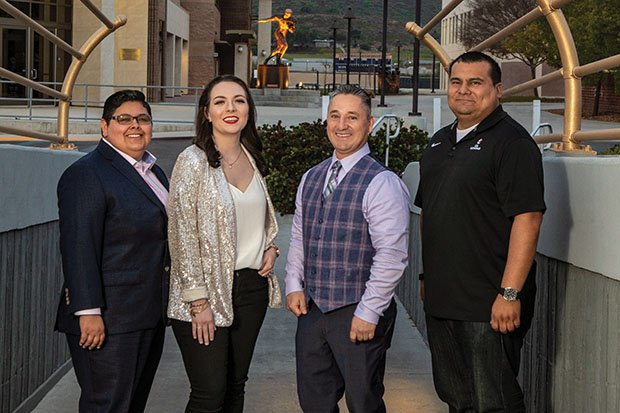 Celebrating the launch of the School for Professional and Continuing Studies in February are, from left, Claira Bailey-Guerra '19, Nichol Cruz '18, current student Tony Ayala and Jose Carcamo '18.

People who take life detours on the way to finishing college have long come to Cal Lutheran, even before they had a degree program of their own or a label like “post-traditional.” The first graduating class included the late Al Stone ’64, who started at California Lutheran College after a career as a Southern Pacific railway conductor. At one point a campus security guard, he was married before arriving on campus and a father of four by graduation at age 29.*

Post-traditional undergraduates today are much more numerous, often considerably older than Stone was, and more likely than other 21st-century undergraduates to be women, single parents, veterans, nonwhite, and among the first members of their families to attend college.

They also make up the fastest-growing segment of college students. By 2026, 8.8 million Americans age 25 and older will enter college, according to projections by the NCES Digest of Education Statistics. That would be down very slightly from a peak in 2010, but up almost 160% from 3.4 million at the start of the century, and climbing.

More than 36 million Americans have some college but no degree — a kind of limbo that takes a toll on these individuals and on our society, as detailed in a 2016 “manifesto” on post-traditional learners from the American Council on Education.

At Cal Lutheran, these students have received concerted attention since the Adult Degree Evening Program, better known as ADEP, began offering classes in 1985. They are now served under the banner of the Bachelor’s Degree for Professionals, an acknowledgement that most have spent time in the workforce. The program offers eight majors and, as of this year, is housed in a new School for Professional and Continuing Studies (see Page 6). The first dean, Lisa Buono, MS ’04, EdD ’11, director of post-traditional studies at the university since 2012, likes to talk about their hard-won achievements, though not with three-dollar words such as “tenacity” and “perseverance.”

“‘Grit’ says it all,” says Buono. “Every day, I am humbled by these students’ grit. They are incredibly motivated. They know what their education is worth. They challenge the faculty. They make the classroom come alive.”

Here are a few of their stories.

Running her first marathon in 2015 primed Nichol Cruz ’18 for the challenge of pursuing a degree in organizational leadership through the Professionals program.

“I told myself I wanted to do something I never thought I could,” said the 32-year-old human resources professional.

Cruz toured the Cal Lutheran campus during high school. She was accepted but ended up at Moorpark College because her family lacked the financial resources for a private college.

“CLU was a dream I thought I never could realize,” she said. After a friend enrolled in the Professionals program a few years back, Cruz checked into it and discovered it was more affordable than she imagined.

Although the program attracts career-changers, Cruz plans to stay in her field. For her, the biggest transformation was the one she saw in herself.

“I am the queen of introverts. I am the one who takes a seat closest to the door where I could be the wallflower,” she said.

At Cal Lutheran, she found herself attending football games and bonding with people including a new best friend.

“These people were invested financially and emotionally. They were taking time away from their families, and that is impactful,” said Cruz, who received the Dedicated Alumni Award at the school’s launch celebration in February.

Like Cruz, Tony Ayala of Oxnard visited Cal Lutheran’s Thousand Oaks campus while in high school and determined that it was out of his financial reach. Instead of becoming the first member of his family to attend college, he ended up enlisting in the Navy and having a career in the Seabees.

After his retirement, he was working for a contractor at Naval Base Ventura County when a friend strongly suggested he enroll in the Bachelor’s Degree for Professionals program at Cal Lutheran.

“I told myself I was too old to do homework,” he said.

At that point, life got in the way, very seriously. His teen son was diagnosed with brain cancer. Ayala became the primary caregiver through three surgeries and chemotherapy, while his wife remained in the military.

Once his son’s cancer went into remission, Ayala listened again to his friend. This time, he met online with a Cal Lutheran admissions counselor and soon was enrolled and working toward a bachelor’s in accounting at age 43.

He has two good reasons to excel. Both his sons are enrolled at Moorpark College.

“I want to be a role model,” he said. “I don’t want them to have any excuse to tell me school is too hard.”

A communications and public affairs professional who was laid off when Occidental Petroleum decamped Los Angeles, Christy Garcia ’14 took this life change as an opportunity to pursue her bachelor’s degree.

In her mid-50s, she had a lot of distance from the college classes of her youth.

“When you start college at 18, you don’t know what you want. When you are an adult you are busy with a job, you have kids, you have a clear intention of doing well because you are making a serious investment,” said Garcia, who now works in marketing for health insurer Anthem Inc. in Thousand Oaks.

As a returning student, she was newly able to look upon professors as team members who were pulling for her. They got across a message that was new to her as a student: “If you are successful, I am successful.”

Jacoby entered Cal State Northridge in 1959, dropped out, got married, had a son, divorced, remarried, helped her husband run a roofing business, saw her son through drug addiction and became an addiction counselor.

At age 59, she deeply regretted having no letters behind her name and enrolled toward a Cal Lutheran B.A.

Jacoby’s passion in pursuing her degree won her an invitation to address all 800-plus graduates of the Class of 2016. She spoke on an enduring theme: “It’s never too late” to achieve your dreams.