For the love of cycling

My husband, Endre “Skip” Anderson ’66, who passed away in January 2019, had three loves. Let me tell you about the one he was asked to give up. 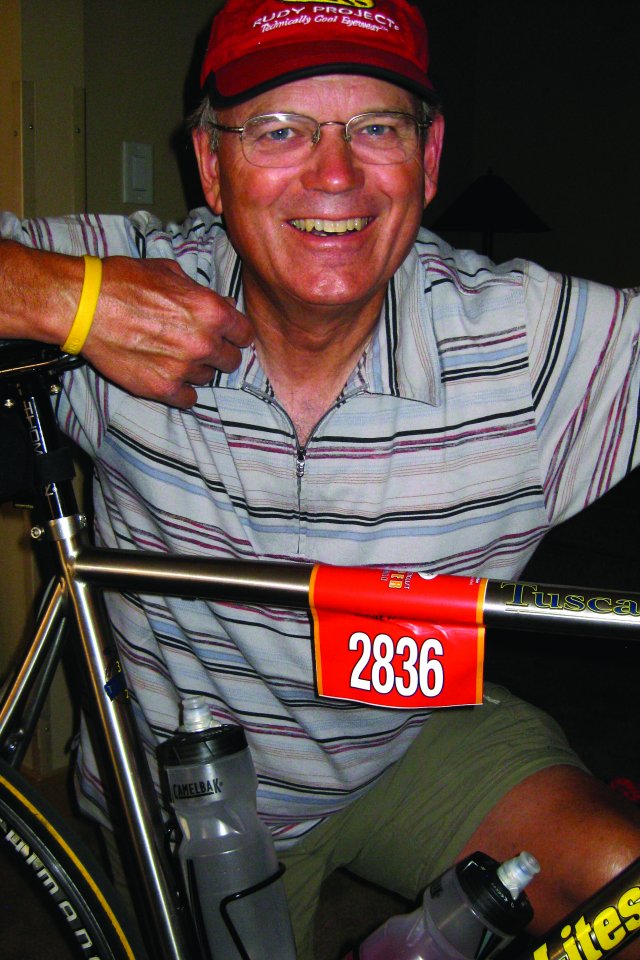 Cycling to Skip was like breathing, easy and exhilarating. He had a bike with him whenever possible. He packed his own wheel bearings, maintained bikes for the neighborhood kids, went consistently on 20- to 30-mile rides, and almost always kept his bikes. He forever regretted that he sold his first, an Olmo that he originally rode to Tacoma, Washington, in the 1963 race against Pacific Lutheran University. PLU’s riders started south toward Thousand Oaks at the same hour that Cal Lutheran riders started north. He had already ridden it to San Francisco and back.

On the California Lutheran College campus, before we met, Skip was known for riding his unicycle, even in the dorm. I still have it on the wall. I have the custom tandem bike that we rode from Durango to Denver doing the second Ride the Rockies together over seven mountain passes. Skip had seven special bikes. The second one that he got while at Cal Lutheran, an Allegro, he kept in pristine shape and won awards for best original classic bike in a Colorado ride/competition for steel framed bikes, twice.

Skip was the first Cal Lutheran student to compete in intercollegiate cycling when it came to the West Coast. In May of 1963, after the Amateur Bicycle League of America caught wind of the recent CLC-PLU contest and sent a letter to athletic director Bob Shoup, Skip went to UC Santa Barbara as CLC’s solitary representative at the first-ever Western Intercollegiate Cycle Meet. He placed sixth out of nine teams even with a disadvantage in four-man time trials. The next year at UC Davis, he improved that result to fourth place, apparently still alone, and took home a trophy.

Skip and I met in the fall of 1966, right after he was commissioned in the Air Force. He told me all his CLC stories and also hung on to papers and memorabilia. I have his handmade racing number, No. 18, from the 1963 intercollegiate meet and maps of the courses for team races, road races and sprints on the UC campuses.

Ever since we’ve lived in Colorado, he loved the very strenuous mountain rides. Not many people do the Triple Bypass. It’s more than 10,000 feet of climbing in one day over three passes, which he rode at age 60! He did six Copper Triangle rides — a one-day journey over Fremont, Independence and Vail passes — and two Ride the Rockies, which cross Colorado. He always wanted to do a cross-country ride, but it was too hard to work out the schedule during his working years, and a cancer diagnosis brought about his retirement.

Every ride Skip did he logged in little notebooks. These stacks of binders have enough material for a book. He would note the weather, what he ate, whom he met, conversations, how he felt, where he ended up. He would make all these journal notations, and part of me was always curious to figure out his lifetime mileage. After his death, I heard from one of his cycling friends that Skip told him he had logged over 70,000 lifetime miles. I’m not surprised he never told me. To him it wasn’t about mileage, just the pure joy of riding on the open road.

On his birthdays, he had a tradition of riding his age in miles. That’s tricky in Colorado. Under ideal conditions, the challenge gets one mile more difficult every year. But apart from the altitude, his birthday fell on Jan. 3 and we could have ice and snow. He was out there if the pavement was the least bit cooperative.

Skip started his cancer battle in 2010. The last time he rode his age in miles was his 70th birthday in 2014, and he did it by sheer will, because he was deep into all kinds of cancer treatments. Even knowing him as I did, I thought that was amazing. Those 70 miles were his last long ride of any note. Most of the later ones were four or five miles around the lake near our home. He was tenacious in riding, and I think the hardest thing for him to do was to stop, but his blood platelets were so low in the last two years that, if he fell, he could have bled out on the spot. I think of how hard it was for him not to be able to get on a bike, even as he fought to keep his strength and humor. He was my courageous hero. Skip had three loves: He loved God; he loved me, our kids and family; and he loved cycling.

He kept working on his bikes to the last. He owned one of four Pinarellos that Alexi Grewal had trained on and used in competition. Grewal won the first gold medal in road cycling for the United States at the 1984 Los Angeles Olympics. Skip bought that bike after it had toured nationally. He fell in love with it when it came through Denver, and the frame fit him perfectly. He did the inaugural Ride the Rockies on it from Grand Junction to Denver, which included the 100-mile ‘Tour of the Moon’ National Monument day, and rode it so hard over the years that it was chipped and well-worn. Before he died, he had it completely repainted and redone to the original condition, decals and all.

I’m telling his cycling story for him, because he loved his years at CLC; the memories of being in its first graduating class, and where his love of cycling made an important contribution to the early history of competitive collegiate cycling in Thousand Oaks. At this writing, the last testament is his faith in our savior Jesus Christ, who has brought him through death to life. His choice of headstone inscription was 2 Timothy 4: 7-8, “I have fought the good fight, I have finished the race, I have kept the faith. Finally, there is laid up for me the crown of righteousness, which the Lord, the righteous Judge, will give to me on that Day, and not to me only but also to all who have loved his appearing.” Actually, at Ft. Logan National Cemetery where he is buried, the inscription had to be shortened, so it reads simply, “Race Finished, Faith Kept.”