Cal Lutheran coaches and staff work together to stay safe and enjoy a successful season. 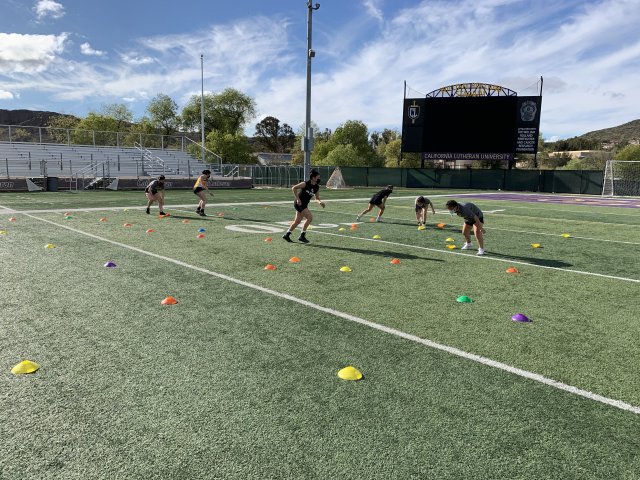 When universities across the country decided to cancel spring sports because of the pandemic, California Lutheran University wanted to give its student-athletes a chance to compete.

It was an unprecedented undertaking that required developing health and safety guidelines, instituting weekly COVID-19 testing, and scheduling practices and games for 22 sports in a condensed spring season. The students, coaches and staff did their parts, and there were no COVID-19 cases during the season.

“It really is going to be a mark in history, not only for Cal Lutheran, but for anyone who was involved because it was an extremely challenging time,” said Daniel E. Kuntz, MA ’02, EdD ’11, director of athletics at Cal Lutheran. “I feel extremely thankful to the university leadership for making the courageous decision to move forward for our students on all levels of athletics.”

Students who compete in traditional spring sports, such as baseball and track and field, were looking at two partially lost seasons after California COVID-19 restrictions cut the 2020 season short. Students were sent home to learn virtually with a limited number returning to campus last spring. The full campus will reopen in the fall.

Kuntz said he expects a traditional fall sports season for Cal Lutheran with fans returning to the stands — provided health guidelines allow it. Fans will be able to watch football, women’s volleyball, men’s and women’s soccer, cross country and more in person for the first time in almost two years. The university is still developing new COVID-19 testing guidelines for the fall in accordance with requirements from the Centers for Disease Control and Prevention, California Department of Public Health, Cal-OSHA, Ventura County Public Health, NCAA and the Southern California Intercollegiate Athletic Conference.

Senior starting pitcher Alexander Rivas helped lead the baseball team to a 17-1 record in 2020, and the top-ranked team had NCAA Division III title hopes until the shutdown occurred. Returning to the mound this spring for an abbreviated 18-game season, Rivas relished the opportunity to face a competitor who was not a teammate.

“I started the very first game of our season, and when I got out there I was a little nervous just because I hadn’t pitched in a real game in over a year,” said Rivas, who picked up the win against rival University of Redlands. “I think myself and everybody were just ready to go and thankful to be out there getting the opportunity to play.”

As much of a shock as it was for student-athletes to go from the fields and swimming pool to learning virtually, coaches had to keep their teams together, recruit new athletes and navigate an avalanche of safety protocols for their teams to compete in person.

The athletic department set up weekly COVID-19 testing, where the students and staff visited the trainers and provided saliva that was sent off to the lab for testing. The department administered more than 5,000 tests, Kuntz said. The goal was to provide a safe experience for students so they would feel comfortable competing.

“They did what they needed to do to stay healthy and to make good decisions so they could (compete), because one mistake and the season could be over,” said Kuntz, noting Cal Lutheran participated in almost 100 events during the spring season.

Women’s lacrosse coach Laura McIntyre said Zoom meetings were the norm, and she encouraged her players to keep up their individual fitness routines until the team could get back together. When restrictions eased, McIntyre’s practices involved individual drills with physically distant players, face masks and frequent wipe-downs of equipment with sanitizer.

“That first day when all we were doing was running, just to see them back together and hear them laugh together again and just enjoy being back together, that to me was a great day,” McIntyre said. “I think they all recognized, especially then, how important it was for them to stick together and kind of keep pushing through.”

Women’s tennis player Carolina Groff Hinojosa, now a senior, was able to keep tennis games and conditioning going after returning home to Guadalajara, Mexico. She regularly practiced with her father, Christopher Groff '88, who had been a top tennis player at Cal Lutheran, but nothing beat getting back on the court with her teammates.

Zaria Opara, a junior thrower on the Cal Lutheran track and field team, remembers a lot of yelling when returning to practice as the players had to raise the volume to speak to friends and teammates. She said the prospect of having a season — which included four meets — kept her training even as a season was uncertain.

“I’ve been way more focused on just honing in and trying to train as well as I can for next season,” Opara said. “I was pretty focused just because I had the motivation and the optimism of getting back on campus.”

Men’s basketball player and senior Charlie Lee credits the coaching staff for keeping the players motivated and informed, even when the coaches didn’t have all the answers.

“Every time we would talk to Coach (Russell White ’94), he’d be like, ‘Get ready to play. We’re going to play. Keep your heads up. Remain optimistic,’” Lee said. “I think that really helped all of us because we felt like we weren’t in the dark and gave us the optimism to not give up.”

Gregg Mansfield is an editor for Poker Runs America and Center Console Life magazines. Based in Ventura, California, he previously wrote for the Ventura County Star, Hispanic Business and Powerboat magazine.