At California Lutheran, a Sikh's course in Christianity

By Beckie Supiano, The Chronicle of Higher Education 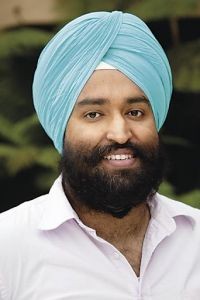 Rahuldeep Singh Gill, who teaches "Introduction to Christianity" at California Lutheran U.

Rahuldeep Singh Gill, a Sikh whose research focuses on the Sikh tradition, is an assistant professor at California Lutheran University, where he teaches "Introduction to Christianity," a required course. Working with his Christian colleagues, says Mr. Gill, has made him a better Sikh. He believes that taking his introductory course can provide a similar benefit to his students, whatever their religious background. Below is an edited version of his thoughts on that subject.

Q. How does your own religious and academic background shape your approach to teaching the class?

A. I'm definitely sensitive to how students who also might be religious are taking the material-particularly the material that sees their religious traditions and reconstructs them in historical-critical approaches. So I think it helps me tread gently on the traditions themselves. But being a practitioner and a scholar of my own religion, I also know that we as intelligent human beings are tough enough and resilient enough to be challenged in those ways, and I think it's good for us to think about religion and not just with religion.

Q. What do you mean?

A. As a society, we think very well with religion. When we wear our religious lenses, we can employ them to see the world. What I think we're less good at is thinking how those assumptions came to be, how they came to be our own, where they're rooted in history.

Q. How do students respond to the fact that they're being taught by a Sikh professor?

A. By the end of the course, students who aren't Christian have appreciated having a safe way to learn about religion. They typically never have concerns that I will preach to them or be inauthentic, because they see me as coming to the study of this like them-from the outside. I've also helped those who are coming from Christian backgrounds better understand their religion. One of my favorite responses from students is when they tell me that they went to church and they understood the passage that was being discussed because they had talked about it in class.

Q. For those who do come to the class from a religious background, can this academic study be linked to their spiritual development?

A. I definitely think so. The word "development" is key there: They're not going to be the same kind of religious practitioner that they were before. Or at least they have to make a choice now about if they're going to be like that or not.