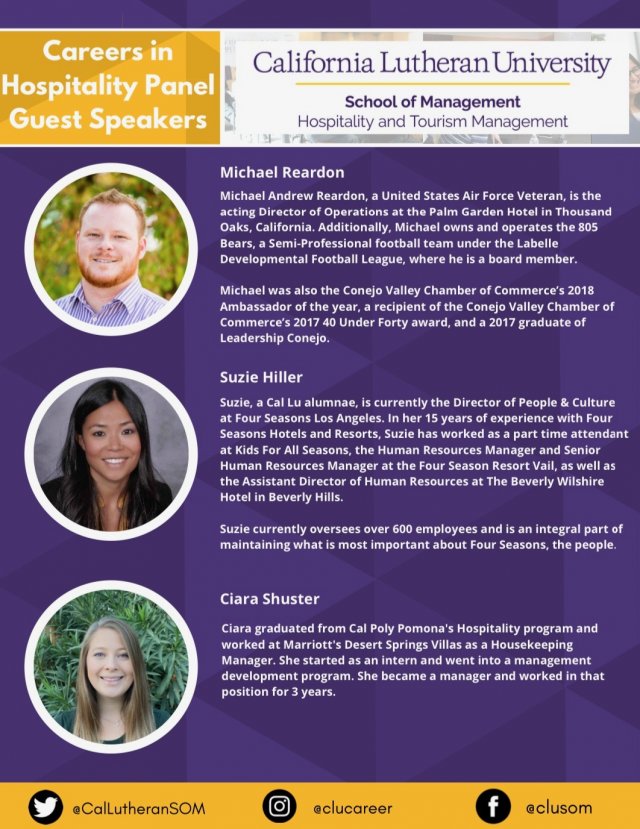 On November 13th, three speakers from the hospitality industry will be participating in a virtual Zoom conference call to share their educational and professional experiences.

Micheal Reardon:
Michael Andrew Reardon, a United States Air Force Veteran, is the acting Director of Operations at the Palm Garden Hotel in Thousand Oaks, California. Additionally, Michael owns and operates the 805 Bears, a Semi-Professional football team under the Labelle Developmental Football League, where he is a board member. Michael was also the Conejo Valley Chamber of Commerce's 2018 Ambassador of the year, a recipient of the Conejo Valley Chamber of Commerce's 2017 40 Under Forty award, and a 2017 graduate of Leadership Conejo.

Ciara Shuster:
Ciara graduated from Cal Poly Pomona's Hospitality program and worked at Marriott's Desert Springs Villas as a Housekeeping Manager. She started as an intern and went into a management development program. She became a manager and worked in that position for three years.

Come join us to learn about the career paths within hospitality and where it can take you!