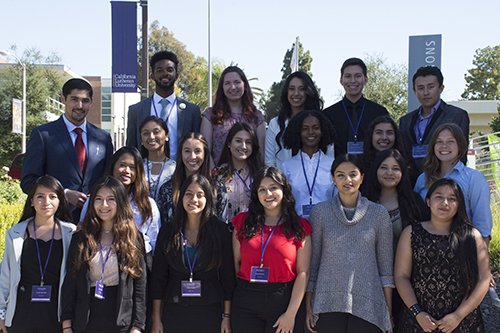 High-achieving undergraduates who are low-income, first-generation college students or of an ethnicity or gender that is traditionally underrepresented in graduate education make up the inaugural cohort of McNair Scholars.

(THOUSAND OAKS, Calif. – July 25, 2018) Several of the first participants in a $1.16 million federally funded California Lutheran University effort to diversify the pool of people with doctorates will present their research at UCLA this week in an important step toward graduate studies.

The Ronald E. McNair Post-Baccalaureate Achievement Program is for high-achieving undergraduates who are low-income, first-generation college students or of an ethnicity or gender that is traditionally underrepresented in graduate education.

Like Ronald McNair, who overcame racial and class injustice to earn a doctorate in physics from the Massachusetts Institute of Technology and to become the second African-American in space, Cal Lutheran’s McNair Scholars face a range of systemic challenges that could derail them from continuing their education. The five-year grant from the U.S. Department of Educationwill enable the university to provide research-based and culturally responsive mentorship to support the students as they navigate graduate studies.

“McNair Scholars are motivated and driven to succeed,” said Janet Awokoya, a former McNair Scholar who became the director of Cal Lutheran’s program in June. “We just need to support them as they overcome systemic barriers so they can maximize their potential, realize their goals and develop into change agents dedicated to finding solutions.”

Each year, up to 25 new students will be selected to participate in the two-year program. They are matched with a faculty mentor and provided with support to publish and present their research. They also attend sessions on choosing and paying for graduate school, preparing for admissions tests and writing personal essays.