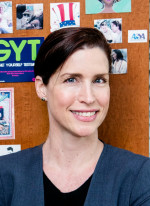 A tenured professor of sociology, Adina Nack received her Ph.D. from the University of Colorado, Boulder and joined California Lutheran University in 2003, after having been faculty at the University of Maine. At CLU, Nack currently serves as Director of the Public Health Program. In the past, she has served as Chair of the Sociology Department, Director of the University Honors Program, Director of CLU's Center for Equality & Justice, and as the Director of CLU's Gender & Women's Studies Program. As a medical sociologist, her research has focused on reproductive and sexual health. An award-winning teacher, she has also won national research awards, published numerous research articles, and authored a book about one of her studies (Temple University Press). She recently collaborated on a study of maternal morbidities with a Co-PI from CMQCC, Stanford Medical School for NYC's Department of Health and Mental Hygiene. A proponent of community-based action research, Nack was a Co-Principal Investigator for Ventura County’s two studies of Latinos/as receiving HIV/AIDS services (funded by the California State Office of AIDS). In addition to her work with VCPH, she has also served as a research consultant for the ELCA Sexuality Studies Taskforce, Western Institute of Hearing, United Women's Leadership Council, and AIDS Desk (Chennai, India). A member of the HIV/AIDS Coalition of Ventura County since 2003, Nack coordinates annual events with the county's World AIDS Day Committee.


Faculty members and administrators who want to join the Speakers Bureau can sign up here: