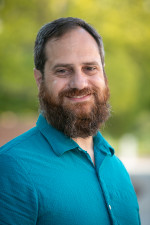 Prior to coming to CLU, Dr. Gagliardo was teaching at a small liberal arts school in Jacksonville, Florida. Before that, he earned an MA and Ph.D. from the University of Texas at Austin and a B.S. in Mathematics from Southwestern University. His Ph.D. is in differential geometry, which can be loosely described as the intersection of Calculus and Geometry.  Currently he is investigating mathematical 3D printing as well as machine learning. You can view some of Dr. Gagliardo's designs at Shapeways.

Dr. Gagliardo's true passion is teaching - something he realized as a Taekwondo instructor in high school (he has a third-degree black-belt). His interest in teaching pedagogy was sparked when he became involved in inquiry-based learning.  Currently, his focus is on equitable practices in the classroom.

Outside of CLU, he enjoys watching and playing soccer, trying new restaurants, reading sci-fi and recently became interested in Magic: The Gathering.