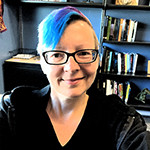 "Dr. Dru" Pagliassotti teaches website design, film theory, film studies, news writing, and copy editing, and supervises student internships. Dru's co-taught classes have included the art/communication travel course Imagining Venice, which took students to Venice and Florence in 2011, 2013, and 2018; the history/communication travel course Faces of India, which took students to India in 2006; and an art/communication course on the history, sociology, and creation of comics, ComicComm. Dru served as the Communication Department chair from 2013-2019 and from 2018-2019 headed the task force that shifted CLU's faculty governance from a full-faculty assembly model to a Faculty Senate/Faculty Assembly model.

Dr. Dru's research interests revolve around the portrayal of gender and sexuality in popular culture. Dru is currently working on a paper applying monster theory to popular characterizations of COVID-19 and recently finished a chapter about neo-Victorian comics. Past research has examined the development and growing popularity of boys' love (yaoi) manga in the West, including a PLOS article that analyzes people's motives for reading yaoi that was co-written with researchers in Hungary. Dr. Dru has also written a chapter on the role of technology in steampunk romance and erotica for Steaming into a Victorian Future and a chapter about female mad scientists in Neo-Victorian Humour: Comic Subversions and Unlaughter in Contemporary Historical Re-Visions. Dru serves on the editorial board of the Journal of Neo-Victorian Studies and Revenant: Critical and Creative Studies of the Supernatural.

Dr. Dru is the author of four novels and a number of short stories; owned and edited The Harrow, an online literary magazine for fantasy and horror, for 11.5 years; and ran The Harrow Press, a publisher of print horror anthologies, for seven years. Dru's past professional experience includes editorial work on print books, journals, and trade magazines; freelance website design; and serving as a content provider for a roleplaying games site on About.Com. Dr. Dru holds a black belt in kempo, plays Dungeons & Dragons, adores iguanas, and is currently trying to master Spanish.

“People Keep Giving Me Rings, but I Think a Small Death Ray Might Be More Practical”: Women and Mad Science in Steampunk Comics in Neo-Victorian Humour: The Rhetorics and Politics of Comedy, Irony and Parody, Kohlke, M.L. & Gutleben, C. (Eds.) Rodopi Press, 2017.

GloBLisation and Hybridisation: Publishers’ Strategies for Bringing Boys’ Love to the United States. Intersections: Gender and Sexuality in Asia and the Pacific, 20. April 2009.

(Book Review) Gender and Community in the Social Construction of the Internet. Information, Communication, and Society, 6(2), 272-274. 2003.

Ghost in the Machine (The Mammoth Book of Ghost Romance, 2012)

To Every Thing there is a Season (Apexology, August 2010)