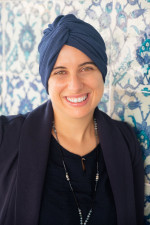 Office Hours: On academic sabbatical for the year of 2021

Dr. Rose Aslan teaches courses on global religions, the Abrahamic traditions in comparative focus, and Islam. She is an interfaith activist well as a scholar of Islam and religious studies.

She is currently pursuing several different directions of research, all of which are connected through her interests in the construction and perception of sacred space, material culture, ritual, and pilgrimage in medieval and contemporary Islamicate contexts. Her in-progress research includes:

Dr. Aslan lived and studied in Egypt for five years and has also lived in Turkey, Iran, Iraq, and Armenia and has travelled extensively throughout the Middle East, North Africa, and Europe. She is fluent in Arabic and can get by in her travels in Persian, Turkish, and French.

"Vocation and Identity Through the Study of Islam: Finding Pluralism at a Lutheran University," The Muslim World (2018).

“The Museumification of Rumi’s Tomb: Deconstructing Sacred Space at the Mevlana Museum,” The International Journal of Religious Tourism and Pilgrimage, Vol. 2, 2014.

Khaled Abou El Fadl. The Search for Beauty in Islam: A Conference of the Books. Islamica Magazine, Issue 19, Spring 2007.