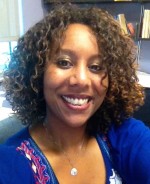 Sheridan Wigginton came to California Lutheran University in fall 2011 to chair the new Department of Languages and Cultures, a position she held until her term ended in January 2018.  She brings her experience as a department chair and a program director to CLU's multi-language department, which offers majors and minors in French, German, and Spanish.

Dr. Wigginton teaches courses in Spanish that range from elementary level language to senior level seminars on Race and Ethnicity in Latin America.  She has served as the president of the of Afro-Latin/American Research Association (ALARA) since 2014.  She has been a member or chair of several search committees and also helped develop the Equity Advocates role as part of the faculty search process.

She is the co-author, along with Richard T. Middleton IV, of the book Unmastering the Script: Education, Critical Race Theory, and the Struggle to Reconcile the Haitian other in Dominican Identity (University of Alabama Press: 2019).

Wigginton, S. and Middleton IV. R.T. (2019). Unmastering the Script: Education, Critical Race Theory, and the Struggle to Reconcile the Haitian Other in Dominican Identity.  Tuscaloosa, AL: University of Alabama Press.

Middleton IV. R.T., and Wigginton S. (2018). The interconnected Challenges and dangers faced by Haitian and Haitian-descended youth in the Dominican Republic. In R.T. Middleton, IV (Ed.) Unequal protection of the law: The rights of citizens and non-citizens in comparative perspective, 195-217. St. Paul, MN: West Academic.

Wigginton, S. (2010). Blackness as a barrier to citizenship and education in the Dominican Republic, Education, Citizenship and Social Justice, 5 (2), 163-170.

Wigginton, S. (2007). The color of citizenship in the Dominican Republic: Chronicling blackness through education policy and reform. In A. Morris & M. Parker (Eds.), Celebrations and Connections in Hispanic Literature, 40-47. Newcastle: Cambridge Scholars Publishing.

2021: Gannett Foundation to support the the development and launch of a new interdisciplinary Spanish Media Minor between the departments of Communication and Languages and  Cultures. Funded: $10,000.