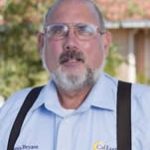 When Dennis Bryant started his first stint at CLU in 1974, the campus’s indoor venues consisted of the Old Gym, Nygreen 1, the SUB and the Little Theatre, and the total number of campus events hovered around 300. Today, the number of indoor venues has grown exponentially and the number of annual events and ser­vices is around 1,600.

Bryant has withstood five CLU presidents and has employed somewhere in the neighborhood of 1,000 students through­out his career. He is the man behind the curtain, here long before anyone arrives and after the last patron has departed.

He has worked his magic pulling all-nighters to turn a gymnasium into a choir hall; he has been the primary point of contact for the Secret Service in preparation for a campus visit by President George H.W. Bush; and he has been the first responder to complaints that a mother duck and her ducklings pooped all over the carpet mere hours before a Board of Regents banquet.

Bryant connects us to our founders and institutional history vouching for the many special people who have walked this cam­pus with dreams of this place being much more than just an educational institution.

He has witnessed the likes of Tom Landry, John Wooden, Sparky Anderson and others coming to CLU again and again despite the fact that there were better facilities elsewhere.

And through his thoughtful care and faithful service to the people of this campus these 30+ years, he reminds us of qualities that make CLU a special place.