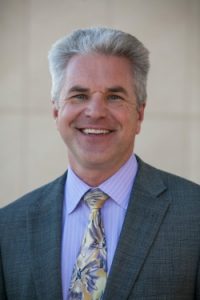 The single most gratifying task Rod Gilbert performed as chair of the Board of Regents was to hand students their diplomas at graduation. “I’ve done it three times, and to see the look in their eyes is indescribable,” he said. “Last year I must have shaken 700 hands, and by the end I could actually feel their collective sense of accomplishment. It is a stirring emotion that bonds me with Cal Lutheran.”

This year, Gilbert will be on the other side of that handshake as he is recognized with the Honorary Alumni Award.

Serving as a Cal Lutheran regent for 12 years, Gilbert was board chair from 2012 to 2015. His guidance and consensus-building approach was instrumental in many university achievements to enhance the academic enterprise, including the 2014 merger with Pacific Lutheran Theological Seminary in Northern California.

“It was a great move for us because we are in the business of teaching and the Seminary teaches pastors to lead their congregations,” he said. “Personally, I was very proud to lead the board in those discussions. It was about listening, being objective and bringing the board together.”

During his years as a regent, Gilbert says he developed lifetime friendships and deep, mutually-respectful associations. “Following in the footsteps of Karen (Bornemann) Spies ‘70 as the chair of the Board, her positive influence on me simply cannot be measured.”

He also notes the late Regent Emeritus Marv Soiland, a man who gave so generously to Cal Lutheran with his time, treasure and considerable talents. “Marv was my most vocal supporter during my three years as board chair. He reached out to me with encouragement and gave experienced counsel in handling delicate situations,” Gilbert said. “I will never forget the lessons Marv taught me about giving back to others and remaining true to our personal convictions.”

In his professional life, Gilbert is president of TOLD Corporation, a Camarillo-based commercial real estate developer and asset manager founded in 1959. Putting his expertise to work for Cal Lutheran, he’s walked every square foot of campus many times over and has served on every building committee since 2003. The vast majority of his service is behind the scenes and out of the spotlight, but has made a profound difference to Cal Lutheran, from his work on multiple committees to his membership on the university’s strategic planning team.

Gilbert says hard work and dedication of effort are the two most crucial ingredients he applies when seeking success, and that embodies his time spent with Cal Lutheran. Today, it continues to shine through as Gilbert remains an active advisor on real estate opportunities and athletics branding, as well as serving on the Investment Committee.

Through the years, he has built on the community work of his parents, Carol and Jack Gilbert (H’05), who are among the most generous lifetime donors in Cal Lutheran’s history. His father, who died in 2012, also was a former Cal Lutheran regent and longtime patron of the university, as well as the 2005 Honorary Alumni Award recipient. The Gilbert family’s generosity has transformed many areas of campus, including the Gilbert Sports and Fitness Center, a state-of-the-art facility that is the centerpiece of Cal Lutheran’s north campus, and a project that was very special to Jack Gilbert. “My Dad always said someday we’d have a national champion at Cal Lutheran and we needed a building to reflect that status,” Gilbert recalls. “And just months ago we got our champions in the Regales volleyball team! It’s so fulfilling to know that they accomplished something we talked about as a family years before. Jack is cheering from heaven.”

Another special project is part of Ullman Commons, the revitalization of a new space on campus that creates a place for people to gather. The Gilbert family dedicated Jack’s Corner, which has become a popular outdoor meeting place for students, and is home to the largest Starbucks in Ventura County. “I remember standing on that patio and feeling like we really did something special,” he said. “We have a beautiful building in Ullman Commons that serves so many purposes. It’s become the crown jewel of the Cal Lutheran campus.”

It was also a pinnacle moment for Gilbert personally. “I could look around and see the benefits of our labor, where we all pulled on the same side of the rope,” he said. “And I know the institution is better for it.”