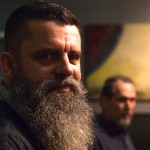 Professor Michael Pearce joined the CLU Art Department full-time in 2005, having previously served as an adjunct professor in 2001. He's an accomplished oil painter, installation designer, and an award-winning theatrical scenic designer. He says teaching painting and drawing to CLU students is the most rewarding job of his life.

He is passionate about figurative painting. In 2018 his "Secret Paintings" exhibit completed a tour that crossed the United States, gaining excellent reviews.

He founded and chaired The Representational Art Conferences, a series of international cultural events designed to provide an academic platform for the discussion of 21st Century representational art.

Between 2005 and 2016 Pearce was the curator of the Kwan Fong Gallery of Art and Culture, which under his direction hosted exhibits like Running with Scissors, The Man Show, The New Romantic Figure, and has shown works by a huge variety of artists including Jeremy Lipking, Mia Tavonatti, Cyn McCurry, Pamela Wilson, and of a broad range of genres, including the AIDS Quilt, photos from communist countries, installation art, and art by CLU's Art faculty. Since 2016 he has worked as a freelance curator, organizing exhibitions of imaginative realism and psychedelic art, showing work by Odd Nerdrum, Roger Dean, Boris Vallejo, Julie Bell, Jeremy Lipking, Brad Kunkle, Adam Miller, and other artists in the pantheon of the great figurative artists of our time.

Michael earned his undergraduate degree in theater from Dartington College of Arts and an M.F.A. in scenic design from University of Southern California. In October of 2007 his PhD dissertation "Vesica: Using Neolithic British Ritual Art and Architecture as a Model for Making Contemporary Art." was accepted by examiners at Plymouth University, England, who awarded the doctorate in 2008.

He is author of Art in the Age of Emergence, a book about representational art in the 21st Century.