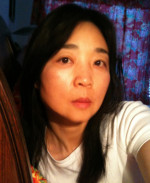 She began her art training at an early age, and then pursued a professional education at the China Central Academy of Fine Arts in Beijing. After this she immigrated to the United States, and studied art at Cal Lutheran University and classical figurative sculpture at Academy of Art University, San Francisco. She holds a Ph.D. in art history and visual culture from the University of Exeter, United Kingdom.

Dr. Aihua is an Artist Member of the California Art Club. Her figurative works have been exhibited in museums including: The Autry Museum of the American West, Los Angeles, and The Chinese Art Museum of America, California.