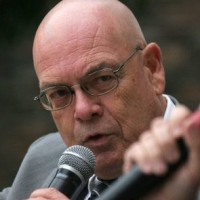 Bill Watkins, Ph.D., is Executive Director of the CLU Center for Economic Research and Forecasting and an associate professor of economics. Since joining the CLU community in June 2009, he has helped launch CLU’s new master of science in economics – a program that focuses on forecasting and applied research.

Prior to coming to CLU, Watkins served as the Executive Director of the University of California, Santa Barbara, Economic Forecast Project. In his nine-year tenure, he expanded the project’s publications and geographic scope and enhanced its reputation. Previously, he served as an economist in the Monetary Affairs Division of the Board of Governors of the Federal Reserve System in Washington, D.C.

Watkins has been widely published in academic journals, traditional media and new media. He is quoted regularly by news organizations throughout the world on the issues of demographic trends, economic development, workforce issues, equity, and California economics.

“Investment in Energy Efficiency:  Do the Characteristics of Firms Matter?” (with Stephen J. DeCanio), The Review of Economics and Statistics, February, 1998.

“Complexity in Organizations,” (with Stephen J. DeCanio, et al) volume 3 of the series “Advances in the Economics of Environmental Resources,” published by the JAI Press.