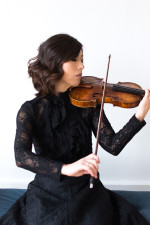 Dr. Keum Hwa Cha is a violinist and violist who has given numerous concerts as a soloist, chamber musician and concertmaster in the United States and in South Korea. She has performed with maestros David Effron, Robert Shaw and Stanislaw Skrowaczewski; Chee-Yun, the Marcus Roberts Trio, Béla Fleck, Time for Three, the New West Symphony, the Idaho State-Civic Symphony, the Cornell Contemporary Chamber Players, the Binghamton Philharmonic, the Cayuga Chamber Orchestra, and the Seoul Tutti Ensemble.

Dr. Cha taught at Idaho State University as an Assistant Professor of Music, and she was an instructor at Pepperdine University, and the University of Rochester. She has been working closely with public school music directors and youth orchestras, giving frequent clinics to K-12 schools and colleges. Her pre-collegiate students were selected to play with All-State Honor Orchestras in Texas and Idaho. The students of Dr. Cha have won numerous prizes at a variety of solo competitions and attended graduate schools as Teaching Assistants at Indiana University, Arizona State University, and the University of Oklahoma.