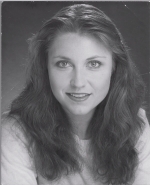 Barbara Wegher-Thompson holds a BA and MA in Dance from UCLA, with an emphasis in performance and choreography.  She toured as a featured performer with the UCLA Dance Company, was a member of Alleluia Dance Theater, and performed with the the LA based company, Martha Kalman and Dancers. During her training at UCLA she had extended, intensive work with the Limon Dance Company and with Alwin Nikolais.

After graduating, she performed in numerous musicals with Santa Barbara Repertory and Alhecama Theater in Santa Barbara.  These productions included My Fair Lady, The King and I, Hello Dolly!, and The Most Happy Fella.  She toured with both Hubert Castle Shrine Circus and Paul Kaye’s Circus International, as part of a dance troupe  - Trios Los Gauchos.

Between 1982 and 1984, Barbara studied film acting at Jane Bolton Studios in Hollywood, joined SAG, and had small roles in film and TV, including Private School and Square Pegs.

She received certification as an Alexander Technique teacher from the Alexander Foundation in Philadelphia in 1991.  She is a teaching member of Alexander Technique International.  During the past 30 years at CLU Barbara has taught Alexander Technique, Linklater Voice, dance, and Movement for Actors with an emphasis in Viewpoints.  For five years she directed the CLU Theater Department’s touring Children’s Theater, This program featured actors from the theater department performing both on tour to elementary schools as well as in productions mounted at the Thousand Oaks Civic Arts Plaza.

Over the years, Barbara has choreographed numerous productions for CLU including Westside Story, Kiss Me Kate, Anything Goes, Cabaret, Company, Candide, The 25th Annual Putnam County Spelling Bee, and The Drowsy Chaperone.  She has been movement consultant for departmental productions including Three Penny Opera; Pericles, Prince of Tyre; and Suddenly Last Summer.

She was a founding teacher with CLU’s Summer Theater Camp for Youth. The camp eventually became part of the Kingsmen Shakespeare Festival and became known as Camp Shakespeare.  Yearly, Barbara directs a two week Musical Theater Workshop as part of Camp Shakespeare.

From 2012 to 2017, Barbara worked with the Dean of Students and the Chair of the Theater Department to create and establish the now existing Dance Minor at California Lutheran University.  As of Fall 2017, students were able to declare Dance as their minor in the newly titled Department of Theater and Dance.

Along with working at CLU, Barbara was affiliated for 25 years with The Young Artist’s Ensemble of Thousand Oaks. She both directed and choreographed for YAE.  Productions she directed include The Lion, the Witch, and the Wardrobe; Charlotte’s Web; and Anne of Green Gables.  Productions she choreographed include The Sound of Music, Cinderella, Kismet, and Big River.  She was the founding director of Hillcrest Players, a division of Young Artists Ensemble designed for the 9 to 15 year old performers.  Some of the Hillcrest Players productions she directed include The Trial of Goldilocks, Witch Academy, Under Jekyll's Hyde, Tongue Twisted, and Twinderella.

Barbara Wegher-Thompson assisted in the development and establishment of the Dance Minor that debuted Fall 2017.  She wrote and currently teaches two new courses that are integral to the minor,  Introduction to Dance and Choreography.

Introduction to Dance, is a four unit course in the history of Dance with a very active learning component.  This course is a requirement for all dance minors.

Choreography I students yearly produces "Moving Images" in the Spring Semester and Choreography II students, produce yearly produce "ForwardMotion→" in the Fall Semester.  Because our students create choreographic works as part of this academic dance course, our dance program is eligible to participate in the American College Dance Association (ACDA).

The American College Dance Association is comprised of university dance programs all over the United States. Yearly, each of the 13 regions holds a conference where students and faculty can present their choreographic work, take classes, teach classes, participate in seminars, and share research.

Yearly, Barbara functions as the ACDA faculty representative for CLU. She oversees what CLU dances are chosen for presentation at the conference. She attends to all aspects of our student's ACDA experience including costuming of the dances, registration, transportation to and from the conference, and hotel accommodations.  She stage manages for our university's performances throughout all four days of the conference.  Additionally, she teaches at the conference.

Each university may send two dances to be adjudicated by a panel of professional choreographers. The process of observing other university's choreography and listening to the professional feedback is an exceptional learning experience for our student choreographers.   The adjudicators select the single best choreography offered at each of the regional conferences that year.  These thirteen dances are subsequently honored by being presented in concert later in the year at the Kennedy Center in Washington DC.

Additionally, four dances are honored by being presented at the historic and prestigious "Jacob's Pillow" in Massachusetts.

Participation in American College Dance Association is a wonderful way to energize and enrich University dance programs and to highlight work well done.  Participation in the ACDA Baja Conference for the past five years has been a significant factor in the establishment and continued success of the CLU dance minor.  Spring of 2020 (during Covid) Barbara brought her choreography students into the world of Screendance - a very unique form of Choreography. Two works by CLU students were presented in the American College Dance Associations first every Screendance Festival.

California Lutheran University Experiential Learning Grant Fall 2015, 2016, 2017, and 2018 bringing Alleluia Dance Theater to campus to conduct the CLU Fall Sacred Dance Celebration. Alleluia Dance Theater is a nonprofit corporation whose mission for 35 years has been to inspire and encourage people in their spiritual journeys, through movement. The day is open to all CLU students and community, but is specifically intended to enrich the curriculum for the students in TA102 Introduction to Dance. Introduction to Dance is an active course in the history of dance including a unit on Sacred Dance throughout history in a multiplicity of cultures. Members of the Alleluia Dance Theater conduct sessions in Sacred Drumming and Dance of Ghana as well as Western Liturgical Christian Dance. Participants from the workshop later dance in Thursday morning service in Samuelson Chapel.

California Lutheran University Experiential Learning Grant Fall 2014, 2017, 2018 bringing Padmini Vasan to campus to conduct a master class in East Indian Dance.  This masterclass was open to any interested student, but was intended to enrich the curriculum for the students in TA102 Introduction to Dance. Introduction to Dance is an active course in the history of dance.  Padmini Vasan has been teaching East Indian dance for 30 years. She is versed in Bharatnatyam, Mohni Atttam and Kathakali.  She founded the Padmalaya School of Dance in Thousand Oaks.

Artists and Speakers Committee funding Spring 2014 for a Marley Dance Floor for the Preus-Brandt Forum Stage.  The Marley dance floor is one of several upgrades to the Preus Brandt Forum stage making it safe for dance students to perform there.  In addition, acquisition of the Marley surface is one of the Equity requirements for professional dance companies. The Artists and Speakers Committee can now bring professional dance companies to perform at CLU.

Community Leaders Foundation Grant for California Lutheran University Day of Dance/Thrill the World Thousand Oaks 2014.  A full day of dance offered to both CLU students and the surrounding community.  The day included masterclasses offered in yoga, jazz, contemporary, and hip hop; hosting a Thrill the World event in Kingsmen Park; while raising funds for World Dance for Humanity.