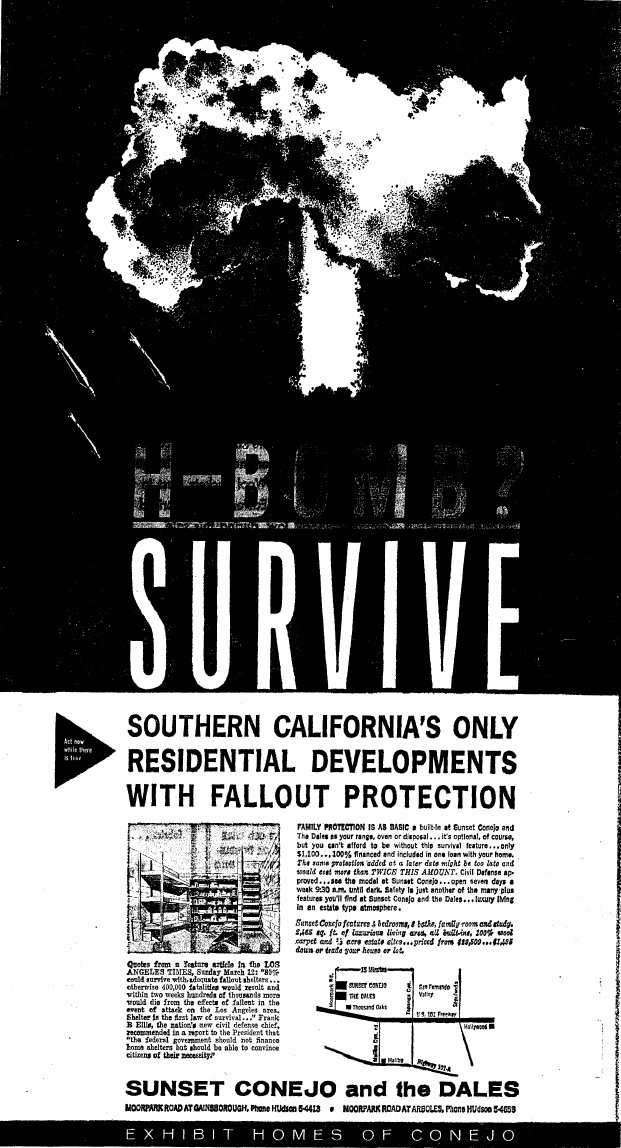 In March 1961, Doremus’ Exhibit Homes of Conejo placed a large ad in the Los Angeles Times dominated by an image of a mushroom cloud and touting “Southern California’s only residential developments with fallout protection” as the way to survive a hydrogen bomb.

(THOUSAND OAKS, Calif. –April 26, 2019) California Lutheran University students will go door-to-door May 4 in search of Cold War-era nuclear fallout shelters in a Thousand Oaks neighborhood that offered them as a unique option in the early 1960s.

Twenty students in Michaela Reaves’ Cold War course will visit about 90 homes in The Dales housing development to document the underground bunkers constructed to protect families from radiation in the case of a Soviet nuclear strike. That neighborhood and the Sunset Conejo development, which Reaves’ students will canvass in the future, may have the highest concentration of home fallout shelters in California, according to a 2011 California Department of Transportation report.

In 1961 and 1962, builder Richard Doremus offered shelters under the garage as a $1,100 extra to buyers of the $30,000 ranch houses in the tracts. With concrete block walls, 2-foot-thick reinforced concrete ceilings, and air exhaust and intake pipes, the 8-by-10-foot shelters were designed to protect homeowners for weeks. Entrances were either through holes in the garage floor or outside.

In March 1961, Doremus’ Exhibit Homes of Conejo placed a large ad in the Los Angeles Times dominated by an image of a mushroom cloud and touting “Southern California’s only residential developments with fallout protection” as the way to survive a hydrogen bomb. Americans were worried about the possibility of nuclear war with the Soviet Union at the time, and the U.S. Department of Defense had designated the Southern California coastal region a high-risk area for a strike. Surrounded by missile silos and home to many aerospace industry workers involved in the development of military aircraft and missiles, the Conejo Valley was a good market for the shelters, Reaves said.

Twenty of the first 26 buyers opted for the shelters, according to the Caltrans report. But there is no record of how many of about 400 houses in the tracts had them. There is little data on home fallout shelters in general.

The students, all born since the Cold War ended, will try to identify, map and photograph every shelter in The Dales development with permission from homeowners. In their past visits to fallout shelters throughout Southern California, Reaves’ students have found some stocked with decades-old cans, clothes and magazines. The students will return to interview residents who have Cold War memories of the shelters. Eventually, Reaves plans to share the information through an online resource and a public event.

On May 4, the students will cover the area bordered by Avenida De Los Arboles, Uppingham Drive, Highway 23 and Moorpark Road. Residents who want to get or provide information can contact Reaves at reaves@callutheran.edu or 805-493-3381.