By the end of this year, the old cafeteria will reopen as a headquarters for student life, student government and experiential learning. Melinda Roper, the top administrator in student affairs, envisions this well-lighted place as one where aims in life grow a little clearer. 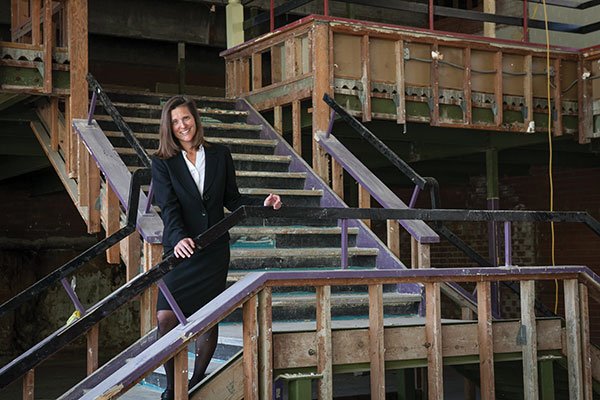 A single staircase will replace the old Caf’s split steps, leading down to lounge space and game tables.

Melinda Roper wants Cal Lutheran alumni to remember something – a class, a counseling session, a club, the country they met through Study Abroad – that set them on a path in life and eventually helped them to recognize their vocation.

At least one such memory. Think of this as the last item on a long wish list for students that’s kept by Roper, who was promoted this spring to vice president for student affairs and dean of students after seven years in leadership roles with Student Life. Before Cal Lutheran, she spent 13 years climbing the student affairs ladder at Duke University, having begun her career at Penn State while earning a doctorate in counselor education.

Arranged chronologically, Roper’s unwritten wish list for students would start off with a good phone conversation with a peer adviser in the weeks before Orientation. It would include a strong feeling of welcome on campus, especially in the first homesick months for undergraduates.

The wish list continues through the large and small life transitions that people talk about whenever they talk about college, graduate school and the job search.

Seeing many of these wishes come true will not mean that everything went smoothly for students. What it will mean is that they have had extraordinary freedom to figure out who they are. And it will mean that some of Roper’s planning has paid off.

“One of the amazing things Cal Lutheran students benefit from is that focus on discovering your gifts and how you can best use them,” said Roper, who attended high school and college in Southern California. “I don’t remember having that kind of conversation, or even thought, when I was an undergrad.”

Take the sophomore year, generally overlooked as a life transition. “You go from this point of being a freshman, where you have all hands on deck and everyone’s working hard to make sure you’re having a great entrance into the university,” says Roper, “and then you’re a sophomore, and you might feel, ‘Where’s all that love?’”

To show some, Cal Lutheran has new, dedicated programming including a sophomore leadership retreat, where students can step back and consider career options that they “are really starting to discern.”

Roper also oversees the services devoted to students’ physical and mental health. She makes sure that Residence Life and other staff members are ready for setbacks and crises, the unexpected.

“The overriding goal is student success,” she says. “What are we doing every day to make sure our students are going to have a successful experience? How are we having a meaningful impact on their educational experience?”

For the last three years, since the former student union building was demolished to make way for Ullman Commons, student government representatives and most of Roper’s team have worked out of temporary trailers. Soon, by the end of 2015, they will move into offices under the barrel-vault roof of the former cafeteria and an adjoining conference space.

The 18,000-square-foot, two-story student union will house programs for, among others, multicultural and international students, military veterans, community service volunteers, travelers abroad and job seekers, and it will provide a lot of room for fun downstairs, with a movable event stage and game tables. The Ahmanson Foundation generously pledged $750,000 toward the $2.5 million project.

The inclusion of an office for experiential learning and research, led by associate provost Grady Hanrahan, means that the student union will also be about academics, particularly academic life outside of the classroom. Housing any part of academic affairs in the student union is unusual at U.S. colleges, but makes sense at Cal Lutheran, says Roper.

“It comes back to offering that opportunity for discovery: What is your gift, and how are you going to use it to make the world a better place? That’s very much the Lutheran way of higher education.”