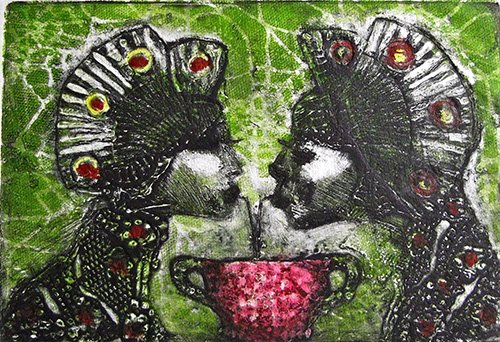 The exhibit will include “Rhyming Couplet,” a collagraph by Corinna Button.

(THOUSAND OAKS, Calif. – May 23, 2017) William Shakespeare-inspired art will be exhibited this summer at California Lutheran University while the annual Kingsmen Shakespeare Festival takes place on the Thousand Oaks campus.

“Shakespeare: A Celebration” will be on display from Thursday, June 1, though Thursday, Sept. 28, in the Kwan Fong Gallery of Art and Culture.

Bankside Gallery in London displayed the first version of this exhibit in 2016 in collaboration with the Globe Theatre to mark the 400th anniversary of the playwright’s death.

At the Kwan Fong, a range of paintings and prints by artists from the British Royal Watercolour Society and the Royal Society of Painter-Printmakers will relate to Shakespeare’s life and plays including “Hamlet,” “Macbeth,” “Romeo and Juliet,” “A Midsummer Night’s Dream,” “The Merchant of Venice,” “Twelfth Night”, “The Tempest,” “Winter’s Tale” and “Antony and Cleopatra.”

The featured artists include Corinna Button, who incorporates printmaking techniques into her paintings and ceramic sculptures, which can be found in the permanent collections of the Victoria & Albert Museum and Ashmolean Museum in England and the Jiangsu Art Gallery in China; David Brayne, whose textured paintings of abstracted figures are about open spaces and expanses; and Veta Gorner, a Russian-born printmaker who works from studios in England and Sweden.

All of the works will be for sale and a portion of the proceeds will benefit the gallery.

This year, the Kingsmen Shakespeare Festival will run from June 30 through Aug. 6 and feature “Love’s Labour’s Lost” and “Julius Caesar.”

The exhibit is free. The gallery is located in Soiland Humanities Center at 120 Memorial Parkway. It is open to the public from 8 a.m. to 8 p.m. Monday through Saturday.