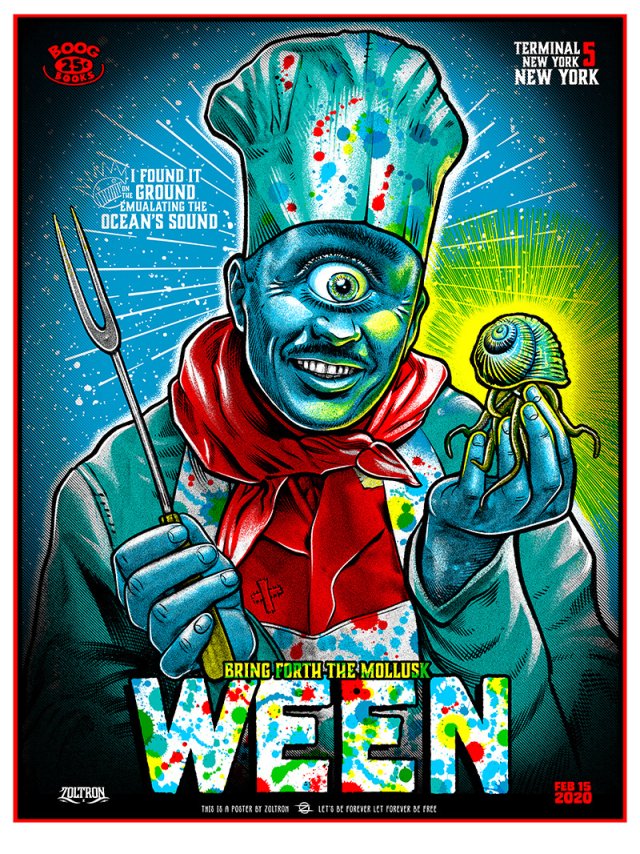 (THOUSAND OAKS, Calif. — March 7, 2022) California Lutheran University is hosting an exhibit of eye-catching rock posters created by Zoltron, who started as a street artist and developed a worldwide fan base that includes rock stars and museum curators.

“Zoltron: The Art of Rock ‘n’ Roll” opened Feb. 14 in the William Rolland Art Center on the university’s Thousand Oaks campus and will continue through April 1.

He is a reclusive artist known only by his pseudonym, but Zoltron’s art has found homes throughout the world. In February, 40 of his posters joined the Rock & Roll Hall of Fame Library and Archives. His posters are in the Museum of Contemporary Art in Los Angeles, Library of Congress in Washington, D.C., and Victoria & Albert Museum in London.

Zoltron’s artistic career began on the streets of San Francisco, where he painted Day of the Dead murals, rock stars and a distraught Ronald McDonald on boarded-up buildings and construction sites. He was the first of multiple street artists to paint Jimi Hendrix’s smiling face on a utility box under a bush so that the foliage looked like a green Afro.

Soon, Zoltron began making posters for the rock acts that came through town. He developed a reputation for his wild mashups of imagery from the 1950s with art from science fiction and children's picture books. He went on to design dozens of rock posters for some of the most popular bands of the past 30 years. Since 1996, he has designed the album covers, posters, website and ads for the band Primus with a mix of hard-rock horror, retro pop culture and psychedelia.

“Zoltron's brilliant posters are a postmodern sampler of the psychedelic style of '60s concert posters mixed with unhinged '90s comic book art,” said Michael Pearce, the Cal Lutheran art professor who curated the exhibit. “Pulling from the past, they are pitch-perfect pictures for our postmodern present.”

The artist’s works are at the heart of a new marketplace for rock posters featuring anti-establishment art created especially for a dedicated fan base of both the bands and the artist, Pearce said. Limited editions of three Ween posters that Zoltron designed for Halloween 2021 sold out in minutes.

“We make accessible art for regular, hardworking people,” Zoltron told Pearce for an article for the Mutual Art website.

Cal Lutheran’s Visual Arts Department is sponsoring the free exhibit. The center, located at 3350 Campus Drive, is open to the public from 8 a.m. to 5 p.m. Mondays through Fridays. For more information, visit CalLutheran.edu or contact Pearce at pearce@CalLutheran.edu or 805-444-7716.