Undergraduates set out on a three-year project to understand the experiences of college students whose immigration status stands between them and their future. 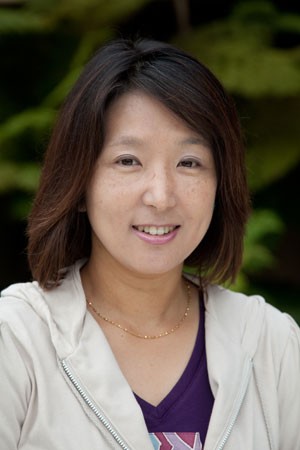 CLU’s ambitious three-year project to collect the personal narratives of undocumented college students in Southern California is the brainchild of Yasuike, a Japanese immigrant who directs the University’s global studies program and whose courses explore a range of immigration issues. However, Yasuike could not easily have undertaken this project without the three undergraduate research assistants – all of them first-generation college students – and their networks of contacts.

In recent years, as Yasuike got to know and mentor undocumented immigrant students at CLU, their struggles became her cause.

“Just the fact that some undocumented students make it to college is itself a puzzle,” she said. “I really wanted to explore what actually made them succeed despite the obstacles they face.”

So she set out to ask them.

Yasuike put together her research proposal last spring and by summer had lined up the student-researchers to help her review literature on the subject, develop research questions and create an interview guide.

She also needed the students’ help to identify potential interviewees at community and four-year colleges in the region. In addition to contacting people they knew from high school and before, the research team members began connecting with student organizations on other college campuses in Ventura County and the San Fernando Valley, especially groups that fought to pass California’s Dream Act last year.

By fall, they were immersed in the interview process, exploring how the lack of legal status impacted social life, educational experiences and identity development.

The study will continue for two more years, with the goal of interviewing 10 undocumented college students or college graduates each year. While the first year’s sample was made up entirely of Latino immigrants, the plan is to expand the interviews to other ethnic and racial groups, including Asians and students from Middle Eastern countries.

“I think being undocumented probably made me the best liar in the whole world, because you end up excusing for everything: for not having a driver’s license, for not having a car. So I can come up with a lie.” — Becky

Many of the students who were interviewed reported struggling to manage their social identity, particularly in high school. They often felt that they had to hide or lie about their status, and they lived with the sense that they were inferior to others and that no one would understand their plight.

They also learned from an early age that many in this country viewed them as criminals and opportunists bent on taking jobs and resources away from American citizens.

Perhaps most devastating, the CLU researchers found, the lack of legal status eroded the confidence and ambition of undocumented students, as they began to grapple with the reality that, despite hard work and dedication to their studies, they would be facing a future of limited opportunity and menial job prospects.

“I always try to put a front so no one ever knows that I was born in Mexico…. I do not like soccer. I like the Chicago Bulls because they are the hot thing.” — Erick

Though feeling deflated, these students often respond by redoubling their efforts, which is what makes their personal narratives so moving, according to student-researcher Rocio Ayala.

“That drive, that resilience they have to keep going is really inspiring,” she said.

Ayala, herself an immigrant from El Salvador, said the study has highlighted the importance of social networking for undocumented students, with those interviewed pointing up the value of finding mentors and enrichment programs that helped them push forward despite the obstacles they faced.

The study also has underscored the empowerment that comes through higher education, with many interview subjects reporting how the college experience allowed them to dig into issues they had never explored and to start advocating on their own behalf for passage of laws to legalize their status.

“None of the students we interviewed were active politically before they came to community college or the University,” said Ayala, who like many of the students she interviewed for the project has become an activist in her own right, speaking at high schools about her own experiences and taking to the streets to demand immigration reform measures such as the Dream Act.

“It’s amazing what the college experience does – it liberates students and allows them to push for social change,” she added. “A lot of undocumented students are now coming out of the shadows, and I want people to hear what they have to say.”

“I had been chosen to go to Australia to represent my school district and I was thinking: I wish I could go, because this is a great honor, right? And that’s when it hit me the most … If I’m getting rejected by society at this point in time just because I don’t have a nine-digit number, what’s [going to] happen when I graduate from high school?” — Walter

The study comes at a time when immigration, especially by undocumented migrants from south of the border, is a hot button political issue nationwide. By some measures, as many as 1.7 million college-age undocumented immigrants between the ages of 18 and 24 live in the United States.

Studies indicate that those who lack legal status are much less likely to enroll in college or earn college degrees. Those who choose to pursue higher education do so despite the fact that they do not qualify for government-sponsored financial aid, are legally barred from employment and could be deported at any time.

To help remove some of the hurdles, a dozen states now have statutes that allow undocumented students to pay in-state college tuition, according to a report by the National Conference of State Legislatures.

But a federal version of that act, which would have given legal status and a path to citizenship to illegal immigrants who were brought to the U.S. at a young age and went on to attend college, stalled in 2010 amid a rising tide of anger over the perception that immigrants were being rewarded for illegal activity.

This June, President Obama issued an order that effectively lifted the threat of deportation for unauthorized immigrants under the age of 30 who came to the U.S. as children and have been here for five years, as long as they have no criminal record and are students, high school graduates or military veterans in good standing. Before the policy change, which allows the same group to apply for temporary work permits, undocumented students could not hold jobs on campuses, regardless of whether tax dollars supported their positions.

The strength of the CLU study lies in its attention to undocumented students’ social and emotional lives, beyond their legal predicament. Maricela Bolanos figured she already knew about the immigrant experience when she signed on as a researcher last school year. After all, her parents had crossed into the United States illegally from Mexico before she was born, lured by the promise of a steady paycheck and a better future. And she had plenty of friends who were undocumented and knew plenty of students at her Oxnard high school who lacked legal status.

Still, Bolanos was surprised by the depth of the isolation experienced by college students who struggle to hide their legal status from teachers and peers. And she hadn’t understood the degree to which their status dampens their future prospects, causing many to short-circuit plans for advanced degrees and professional careers.

“It’s really sad,” said Bolanos, who graduated in the spring with a sociology degree. “They’re being shut out from a society that would definitely benefit from their hard work and talent.”

Lynzi Tarango, the only member of the student research team who did not graduate in the spring, has signed on to take part in the project again next school year.

Tarango said it would be ideal if the study influenced new legislation that would help undocumented immigrants achieve legal status. But in the end, she said, what’s most important is to break down stereotypes and prejudices.

“We’re kind of giving voice to these students who don’t have a voice,” Tarango said. “These are people who are contributing a lot to our society and who would contribute a lot more if they were allowed to.”

Ultimately, Yasuike wants to publish the research and present it at academic conferences and community forums aimed at bringing better understanding about the roadblocks faced by undocumented immigrant students and steps that can be taken to help them fully plug in to the American experience.

“What I’m trying to do is put a human face on these undocumented people,” said Yasuike, who since her arrival at CLU in 2006 has encouraged her students to not only examine the challenges of immigration but to find ways to address them.

“All of the countries of the world are using immigration policy to bring the best minds to their countries,” Yasuike added. “Here we have a group of young people who are highly educated and who have a marketable skill set. Can we afford to lose all of them to other countries?”

Editor's note: This project is supported by funding from the newly established Center for Equality and Justice Fellowships for Research in Service of Communities.