Rogers gets a chance to strut his stuff 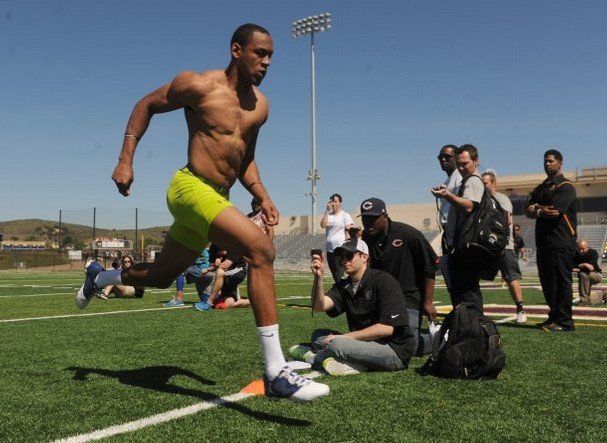 Cal Lutheran senior wide receiver Eric Rogers is timed by NFL scouts as he finishes a 40-yard dash at the university’s William Roland Stadium on Monday.

Eric Rogers wasn’t expecting more than a handful of scouts to attend his Pro Day.

But the Cal Lutheran wide receiver was pleasantly surprised to find representatives from at least 11 different NFL teams waiting for him to arrive on Monday afternoon at CLU.

Rogers was joined at the workout by Whittier teammates Kimble Tillman and Dameron Fooks and by offensive lineman Joe Unga of Midwestern State University in Wichita Falls, Texas.

After being weighed and measured, the four players were put through various drills.

They performed the vertical leap and bench press in CLU’s weight room before moving to the field for the broad jump, 40-yard dash, 20-yard shuttle, three-cone drill and some route running.

The most crucial result for Rogers was his 40-yard time.

The 6-foot-3, 206-pound All-American had never run a timed 40 before he started his draft training in January with Ryan Capretta at Proactive Sports Performance in Westlake Village.

The scouts asked Rogers to run the 40 three times, and their stopwatches displayed varying numbers.

“They usually take three and it sounds like the three times they are going to take are 4.48, 4.50 and 4.51,” Capretta said. “Some scouts thought he was a 4.6 guy, so I think he really showed what kind of athlete he

was and how much work he put in. He had confidence out there and just did his thing.”

He caught 91 passes for 1,298 yards and 18 touchdowns as a senior last season to the set the program’s single-season records for receiving touchdowns, receptions and total scoring (126).

But playing at the Division III level didn’t give Rogers as many chances to showcase his skills to a wider audience.

He tried to take full advantage at his Pro Day.

Rogers finished with a vertical leap of 37 inches, a broad jump mark of 10 feet, 1 inch, and times of 4.1 and 6.89 seconds in the shuttle and cone drill, respectively. He also benched 225 pounds nine times.

“It’s a little more intense with all the scouts watching, but I just tried to go out there and relax,” Rogers said. “I felt like I did OK. You are not going to have a perfect day. But if you do have an OK drill or a bad drill, you have to move on to the next one and that is what I focused on.”

Haulcy-Bateman attended rookie camps with the Miami Dolphins and San Diego Chargers, but did not stick with an NFL team.

Rogers is expected to attract much more interest during and after the NFL Draft, which takes place April 25-27.

McEnroe labeled it a “Chamber of Commerce” moment for the university.

“Just the ability to have an event take place here that is on the NFL Network for the whole month with our name scrolling across the bottom of the screen with the date is big,” McEnroe said. “We were able to attract national attention and directors of scouting and pretty important guys from a number of teams were here today. It’s a great event for our university and Eric is a great representative of CLU both on and off the field.”

As McEnroe watched Rogers run through drills and catch balls, he couldn’t help but reflect on his progress at CLU.

“It makes me really proud to see where he came from four years ago when he got here to where he is now,” McEnroe said. “I have seen tremendous growth physically and emotionally from Eric.”

Rogers plans to keep training at Proactive through the draft, and will now be moved to the “veteran group” to work alongside NFL players like Clay Matthews, C.J. Spiller and Taylor Mays.

Rogers is hoping to join them as an official member of an NFL roster in the near future.

“I would love to see him get drafted, but going as a priority free agent is better in some cases,” Capretta said. “I think he absolutely is going to get a shot of getting into a camp, and that is all you can ask for. He’ll get his chance to perform there and show them what he can do.”