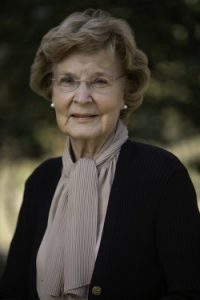 Siri Eliason served on the Board of Regents during a critical time in the university’s growth, from 1994 to 2003, and as chair from 1998 to 2000. Her leadership was instrumental in the development of the Strategic Plan and success of the “Now is the Time” capital campaign. The $93 million raised in the campaign allowed the university to build much-needed facilities (including the long-awaited athletics complex) and create new programs, centers, endowed professorships and scholarships.

Eliason came to America in her 20s with her husband, Sven. A businesswoman and importer of Scandinavian furniture for decades, she approached her board responsibilities with great business acumen, always thinking in terms of growth – more students, more professors, more facilities – and what it would take to achieve that growth. She coordinated efforts to work on goals decided on by the board, applying her skills in listening and organizing.

Eliason, who commuted to Thousand Oaks from San Francisco for her first few years as regent, now lives in University Village and maintains close ties with the university. She is very proud of Cal Lutheran and likes the fact that the university works to find the right students to admit then helps them to go out into the world and do good. She also believes the university’s diverse environment is excellent preparation for life after graduation. Learning to be more open and accepting – and strong in one’s beliefs – is important for every student’s future, she says.