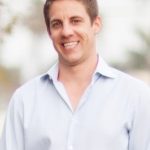 Born and raised in the Pacific Northwest, Evan White’s entrepreneurial spirit began as a kid with a leaf-raking and snow-shoveling business. Working as a youth soccer referee on the side, Evan was able to upgrade his equipment and build his first business.

Baptized Missouri Synod and confirmed ELCA, Evan has always had a strong foundation in the Lutheran church. He became involved with the Lutheran Youth Organization of the Eastern Washington Idaho Synod and traveled the country for leadership events. In high school, Evan created a job for himself in the church’s after-school daycare program, teaching him the value of playing while you worked, a lesson he continues today.

At Cal Lutheran, Evan embraced hands on learning and developed incredible relationships with faculty, staff, and students. He explored the Grand Canyon’s million-year-old rocks with Dr. Ritterbush and used Dr. Docter’s office to field “work” calls he would later share with his classmates. He adopted Dr. Jerry Slattum as his grandparent for a semester, learning a love for humor while utilizing art as a vehicle for exploration. Evan was also crowned Freshmen Homecoming Prince, participated as a speaker and leader for local LYO events, and graduated with a Bachelors Degree in Communication Marketing with honors.

Since graduation, Evan has helped celebrities, brands and entrepreneurs use digital media in the most effective ways. Through his career he has helped an online poker company purchase the naming rights to a town and helped a friend trade up from a single red paperclip to a house. Evan used a litter of puppies to help turn Ustream into a household name and built a company based on wearing t-shirts online. In 2011, Evan helped launch the mobile application Viddy to the world, taking their user base from 50k to over 50M in under two years. Currently Evan continues his entrepreneurism running his own Public Relations company Evan White PR. Evan's projects have been featured in The Today Show, Good Morning America, TIME, LA Times, New York Times and more.

Evan lives in Venice Beach, CA with his fiancé Teresa, a Corporate Paralegal for Boingo Wireless. They will be married later this year in Huntington Beach.