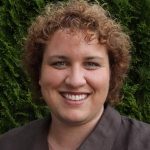 The CLU Alumni Association Board of Directors is proud to recognize Christin Farrell ’00 as the 2008 Outstanding Young Alumna. Farrell was honored at CLU’s Opening Convocation in September in Samuelson Chapel.

As a mental health specialist with the Oregon Department of Corrections at Oregon State Penitentiary, Farrell provides counseling for more than 150 inmates including those who are in hospice and on Death row. Additionally, she has a small private practice counseling youth and families in a church setting.

As a student at CLU, Farrell served as an resident assistant, played the cello, and participated in Lord of Life. After graduation, she served as Interim Executive Director at Camp Lutherwood in Cheshire, Ore., and also found time to volunteer as a firefighter with Lane Rural Fire and Rescue.

In 2001, she accepted a position as the Director of Family Life Ministries with Christ the Good Shepherd Lutheran Church in Salem, Ore. During her six years there, she worked with children of all ages and became a member of the Oregon Synod Youth and Family Committee, a position she still holds today. The young alumna earned a degree in Marriage and Family Therapy from George Fox University in 2007.