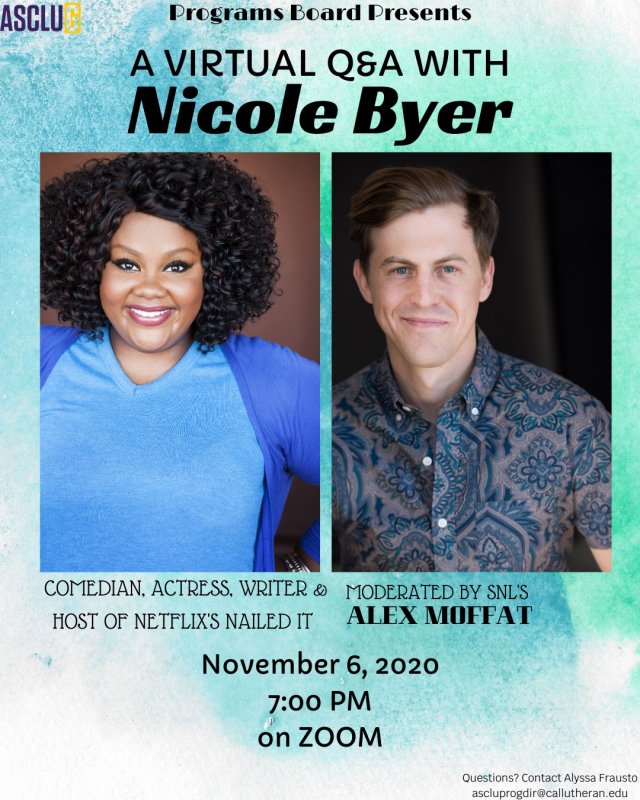 Watch as Nicole Byer and Alex Moffat answer questions submitted by YOU, the students of CLU, and get ready to laugh!

Nicole Byer is one of the most versatile and recognizable voices in the comedy landscape today. She currently stars as host of Netflix’s Emmy-nominated competition baking series NAILED IT, for which she was also recently Emmy-Nominated for Outstanding Host. She can also be seen as producer and star of the scripted comedy series LOOSELY EXACTLY NICOLE, which debuted its first season on MTV and aired its second on Facebook Watch. The show features her unique brand of confidence and irreverence as she demonstrates the hilarious missteps of what it means to be out on your own for the first time. Byer also appears on the Netflix animated series TUCA & BERTIE alongside Tiffany Haddish and Ali Wong  and continues to host her popular weekly podcast WHY WON’T YOU DATE ME.

Byer was an early standout and fan favorite on MTV’s hit series Girl Code, a strong and smart female-driven comedy series that brings viewers a hilarious how-to manual full of over-the-top tips to push the envelope and open the dialogue about the wonders and woes of womanhood. She is also an Upright Citizens Brigade alum who continues to cement her status as a force in standup comedy, regularly performing in cities across the country.

Alex Moffat is a New York-based actor, stand-up, writer, and current cast member on “SATURDAY NIGHT LIVE” where he has been a breakout performer the past two seasons and will return this fall as a repertory player. He hails from Chicago where he was a regular performer at iO and The Annoyance Theatre as well as an official acro-dunker for the renowned Chicago Bulls. You can see him on Showtime's BILLIONS, starring in the feature UNCLE JOHN or the soon to be released theatrical film OPENING ACT.  Alex lent his voice as the role of JIMMY in Disney's sequel WRECK-IT RALPH 2 and most recently, he can be seen in the film "The Opening Act" directed by Steve Byrne featuring an all-star comedy cast including Jimmy O. Yang and Bill Burr

This event is part of the ASCLUG series.