Dr. Orville Dahl was given the responsibility of getting California Lutheran College going. Former Executive Director of higher education for the Evangelical Lutheran Church, he came first as a consultant, then, in July, 1957, was President of the California Lutheran Educational Foundation charged with developing the school.

Born in Duluth, Minnesota, Dr. Orville graduated from St. Olaf College at Northfield, Minnesota, and returned to his alma mater after graduate work at the University of Minnesota to serve as Assistant Dean of Men and Professor of Speech. He was Dean of Administration at Vermont University, and, during World War II, served as Commanding Office of Naval V-12 units in New England.

In addition, he was a fund counselor for the American City Bureau. He was the Vice President of the California College of Arts and Crafts in Oakland, California when he was called to head the Division of Higher Education for the Evangelical Lutheran Church, serving from 1951 until 1956.

At first, Dahl did not want to be president of the school, but once in the position, he conducted his office with skill and determination. He stepped down from the office in 1963.

Raymond Olson became president of California Lutheran College when founding president Orville Dahl stepped down in 1963 in the second year of the school's life. Olson was a student at Waldorf College, Forest City, Iowa, in 1931 when he met his wife, Helen, as she was completing her teaching degree. Helen taught as Ray attended Augustana College, Sioux Falls, South Dakota, and Luther Theological Seminary, St. Paul, Minnesota, earning his bachelor's and master's degree in theology.

Olson was serving as General Secretary for Stewardship for the American Lutheran Church when he was called to CLC. He occupied the chair as president for eight years before retiring in 1971, becoming President Emeritus and chairperson of the Conejo Future Foundation, an organization formed to examine directions for the new city of Thousand Oaks and its environs. As president of the foundation from 1972-80, he initiated Conejo Future's task force on the arts which led to the establishment of the Alliance for the Arts, of which he was founding chair. The Alliance for the Arts was instrumental in developing a performing arts theater in the Thousand Oaks Civic Arts Plaza. Olson died October 21, 2006, at the age of 96.

Dr. Mark A. Mathews came to CLC to be a professor of business management but, shortly thereafter, served as acting President and then President from 1972 until 1980. Before he took office, the school had operated in the red, but his sound business principles enabled the school to operate in the black while encouraging the interest of the Conejo community in the college.

Mathews was active in the community and received numerous awards, including "Man of the Year" from the Conejo Valley Chamber of Commerce in 1986. He was a member of the Conejo Future Foundation, Hospice of the Conejo, the Community Leaders Club, the Boards of the United Fund of Ventura County and Los Robles Hospital, Rotary International, and Habitat for Humanity. He organized the annual Mathew's Business Management Forum to bring business and industrial leaders to CLU to meet with students on topics of common interest.

After his retirement, Mathews and his wife, Jeannie, spent several months of each year in Puerto Vallarta, Mexico, where he received an appointment to the board of El Colegio de Americana, a kindergarten through 12th grade school, and also volunteered with Habitat For Humanity. Mathews died on October 27, 2018 at the age of 92.

Dr. Jerry H. Miller served as the fourth president of CLU for eleven years. Following his term as president, he held the office of chancellor and led CLU's development activities until March 5, 1993.

He received his bachelor's degree at Harvard University in 1953, his M.Div. at Hamma School of Theology, Springfield, Ohio, and his D.D. at Trinity Lutheran Seminary, Columbus, Ohio. After serving as a parish pastor, he was Assistant to the President of the Ohio Synod of the Lutheran Church in America and Executive Director of the National Lutheran Campus Ministry in Chicago, Illinois.

During Miller's tenure several innovations that influenced the future of CLU took place. Cal Lutheran received a remarkable ten-year accreditation from WASC and was ranked as one of America's Best Colleges by U.S. News and World Report. The University joined the Southern California Intercollegiate Athletic Conference (SCIAC), and the faculty voted to adopt "Core 21," a new curriculum that took effect in 1992.

In 1986 California Lutheran College was restructured as a university better to accommodate its growing graduate programs in business, education, counseling and administration.

Dr. Luther Luedtke became president of California Lutheran University in 1992 after serving as a faculty member and administrator at the University of Southern California (USC) for twenty-two years.

Raised in Hutchinson, Minnesota, Luedtke graduated from CLU's sister school Gustavus Adolphus College, St. Peter, Minnesota, in 1965 and earned his Ph.D. in American civilization in 1971 at Brown University. He taught English at USC and also served as Chair of the American Studies Program, Director of the School of Journalism and Director of the American Studies Research Center in Hyderabad, India.

Luedtke led California Lutheran University for nearly fourteen years, the longest term of any president. One of his first undertakings when coming to CLU was to initiate a new Campus Master Plan.

The Master Plan led to the physical transformation of the campus. Soiland Humanities Center, Overton Hall, Zimmerman Music Studios, Spies-Bornemann Center for Education and Technology, and Grace and Mogen residence halls were completed during Luedtke's tenure and the Gilbert Sports and Fitness Center, George "Sparky" Anderson Baseball Field and Samuelson Aquatics Center were under construction.

The installation of CLUnet in 1994, with its fifty-eight miles of fiber optic cable, won the national CAUSE Award for Excellence in Campus Networking, and that same year CLU's award-winning National Public Radio station, KCLU-FM, was launched.

As the physical plant expanded, the quality and reputation of the University were enhanced as well. Academic strides became apparent with the funding and appointment of CLU's first two endowed chairs, the addition of the first doctoral program, the one hundred-point increase in SAT scores for entering freshmen, and placement in the U.S. News & World Report rankings as one of the top twenty western regional universities.

In 2006 Board of Regents appointed Dr. John Sladek, Vice Chancellor for Research at the University of Colorado at Denver Health Sciences Center, as CLU's sixth president. He served as President at Cal Lutheran for one year before returning to University of Colorado to resume full-time research on Parkinson's disease.

During his presidency, Sladek presided over the dedication of several new athletic facilities including the Gilbert Sports and Fitness Center, Samuelson Aquatics Center and Ullman Stadium. 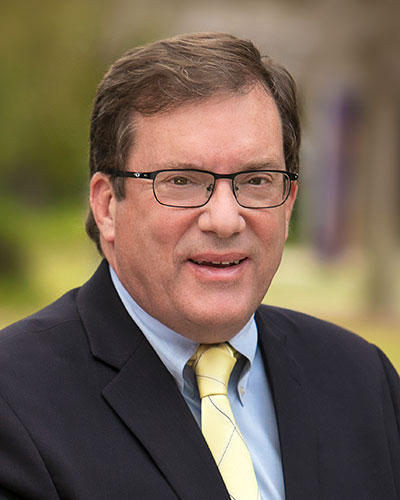 A native of Boston and a historian by training, Kimball ompleted his undergraduate degree at McGill University in Montreal before earning master’s and doctoral degrees from The University of Chicago.

Prior to moving west, Kimball spent 15 years on the faculty at Augsburg College in Minneapolis, the last six as provost and dean. Earlier in his career, he was a faculty member at University of Nebraska, Lincoln. With a specialization in U.S. history, he published and lectured on topics ranging from the history of sport and the history of American cities to trends in higher education. At Cal Lutheran, he often did double duty as administrator and professor by leading Freshman Seminar classes and teaching the popular Honors Program class U.S. History Through Baseball as well as occasional courses in history, sports management, and higher education leadership.

During Kimball’s presidency, the university experienced more than a decade of expansion, opening several facilities, adding programs and centers and expanding student research opportunities. Enrollment not only increased but became more diverse. Cal Lutheran was designated as a Hispanic-Serving Institution providing a stronger focus on serving underrepresented students and allowing access to millions of dollars in federal grants. The university also launched the Center for Economic Research and Forecasting, the Center for Nonprofit Leadership and the Center for Autism and Communication. It merged with Pacific Lutheran Theological Seminary in Berkeley and became the temporary home of the NFL’s Los Angeles Rams during his tenure.