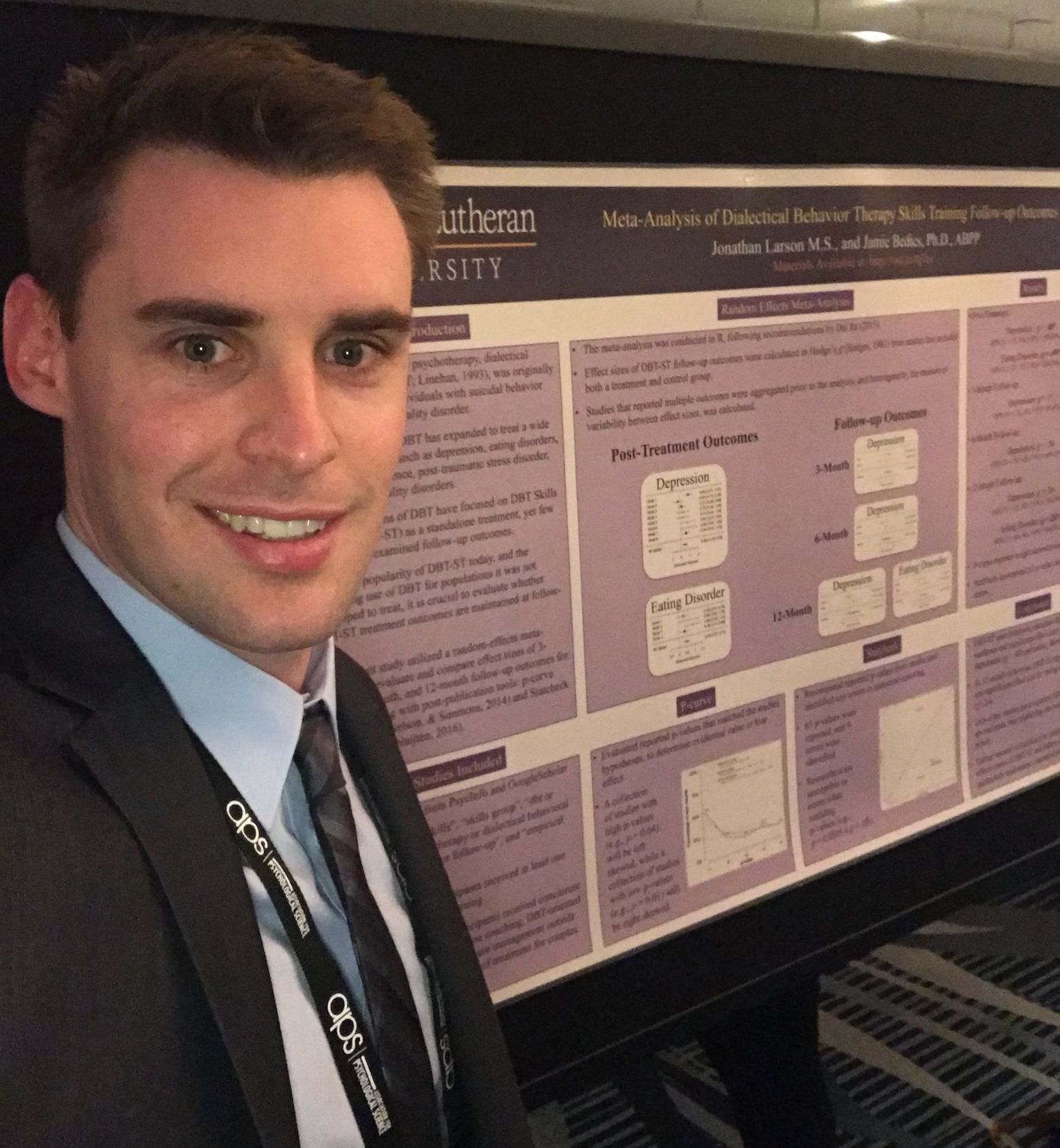 Jonathan Larson received his BA in Psychology and Social Behavior from the University of California, Irvine in 2014. He went on to receive his MS in Clinical Psychology from California Lutheran University in 2018, and he is currently pursuing his PhD in Clinical Psychology at Wichita State University. While at CLU, Jonathan received specialized training in dialectical behavior therapy under Dr. Jamie Bedics and defended his Master’s thesis titled “Post-publication evaluation of dialectical behavior therapy skills training” which was presented at the annual meeting of the Western Psychological Association in Portland, OR 2018. In addition, Jonathan presented a poster titled “Meta-analysis of dialectical behavior therapy skills training follow-up outcomes” at the Association for Psychological Science in San Francisco, CA 2018.  Currently, Jonathan is working alongside Dr. Rachel Petts at WSU in the Integrated Behavioral Health Lab to implement and evaluate behavioral health care in the community.  His current interests include psychotherapy process and outcome research particularly in behavioral health care. 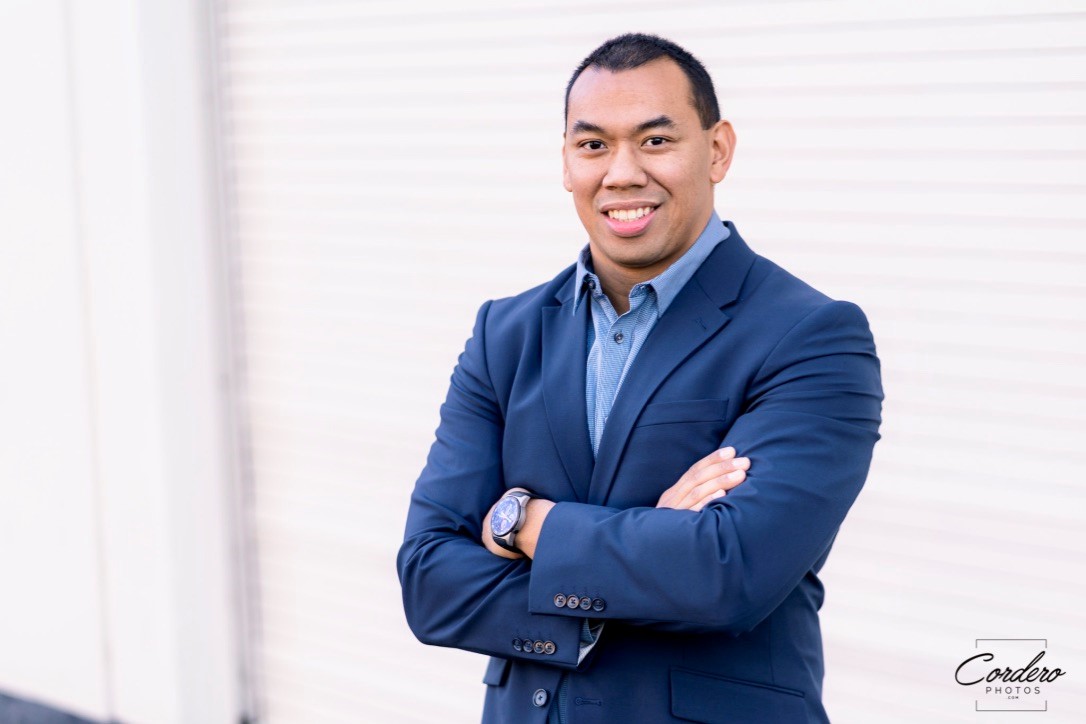 Samuel Soria Jr. received his BA in psychology from California State University, Fullerton, his MS in clinical psychology from Cal Lutheran, and is currently pursuing his PsyD in clinical psychology at Nova Southeastern University, Florida. Mr. Soria’s research has focused on suicidality in first responder and military populations. At California Lutheran University, Mr. Soria has worked with Dr. Bedics and studied suicidal behavior. His Master’s thesis involved a qualitative analysis of suicide in the firefighter community using the Interpersonal Theory of Suicide. In his current PsyD program, Mr. Soria is working with Dr. Vincent Van-Hasselt at Nova Southeastern University, concentrating his efforts on police psychology. His current research includes the analysis of variables associated with Baker Acts and the examination of homicide-suicide in police populations.

Deirdre graduated from the MS Clinical Psychology program in 2016. Since graduating she has been the director of a non-profit community re-entry program for individuals on active state parole called the Santa Barbara Day Reporting Center. She manages a staff of 9, oversees the entire facility and budget, and serves as the head case manager for approximately 40 clients. She is currently managing four Santa Barbara County Probation programs. Deirdre is also highly involved in the Santa Barbara re-entry and criminal justice community and serves as a voting member of the Santa Barbara County Re-Entry Steering Committee, co-chairs the Santa Barbara Probation Evidence Based Practices Quality Assurance Committee, and is active on several other committees that are committed to linking parolees and individuals on probation with community resources that will assist them in reintegrating successfully into their communities while reducing recidivism. Deirdre has given presentations on reducing recidivism using evidenced based practices both at the local and state levels, most recently to the Secretary of the California Department of Corrections and Rehabilitation, Scott Kernan in October 2017. Deirdre is participating in a research project run by Dr. John Coie of Duke University. The protocol title is "Reduction of Recidivism through Neurofeedback Training" and they are in the first year of three years of collecting data after receiving approval from the State of California Health and Human Services Agency Committee for the Protection of Human Subjects in 201 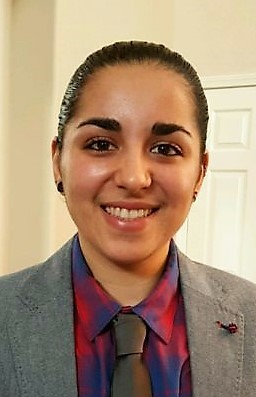 Halleh Hashtpari, MS graduated from the MS Clinical Psychology program in 2014 after defending her Master’s thesis titled, Identity integration on psychological well-being of heterosexual and sexual minority Iranian Americans. Post-graduation, Halleh worked at a residential treatment center first as a residential counselor and then as a clinical site supervisor, where their primary responsibilities were centered around crisis management, and skills coaching. This Fall, Halleh began a PhD program in Counseling Psychology at the University of Utah. At the university, Halleh has taught undergraduate psychology courses; completed both quantitative and qualitative research relating to intersectionality, identity, culture and wellbeing (resulting in multiple peer-reviewed presentations and two manuscripts under peer review); co-authored a book chapter on lifelong learning in the helping professions that is currently in press; and received an honorable mention for leadership from the counseling psychology department at the University of Utah. This summer, in addition to continuing their doctoral work, Halleh will be joining Salt Lake Community College as an adjunct faculty member. 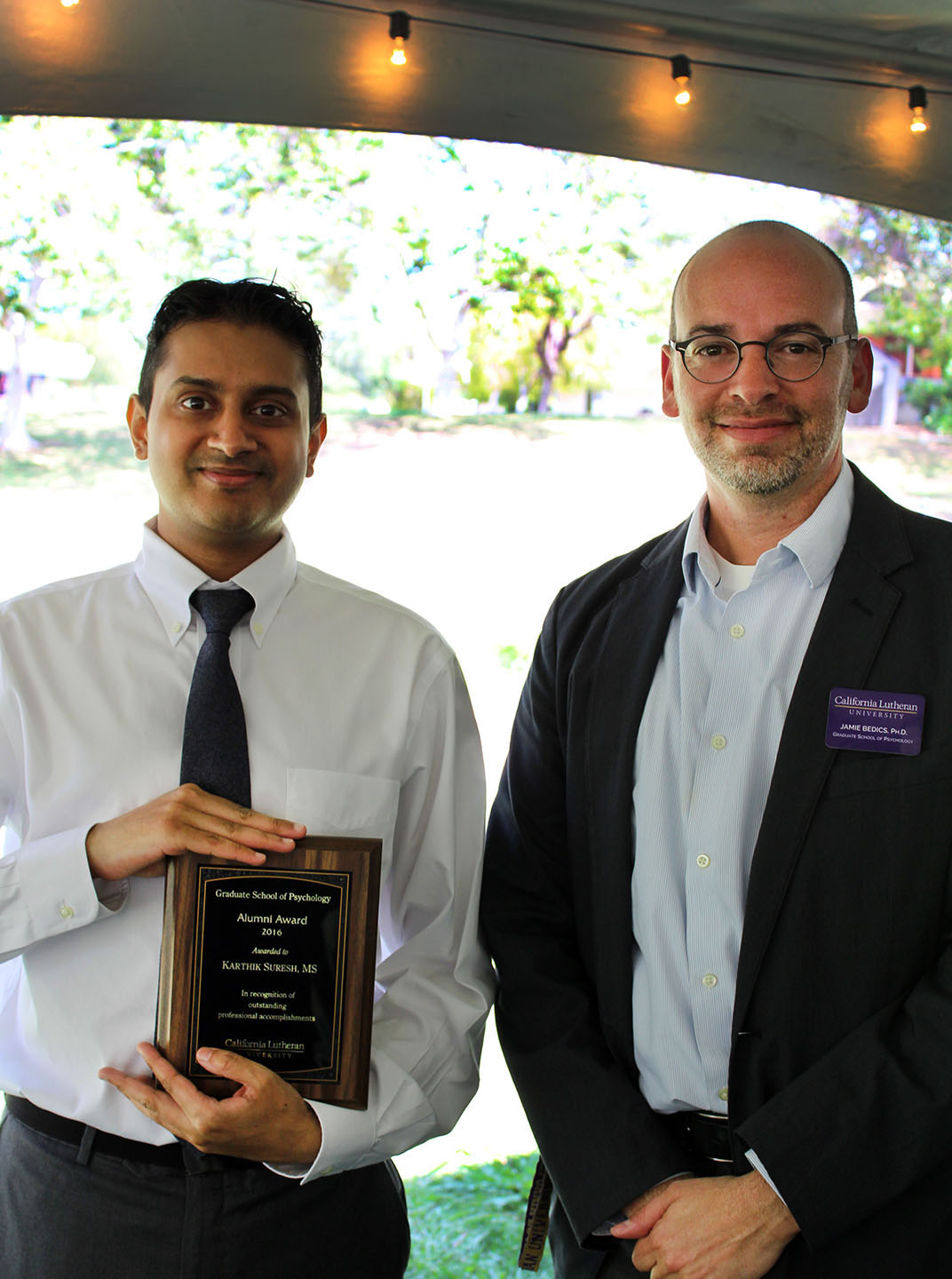 Karthik Suresh graduated from the MS in Clinical psychology program in 2013. Under the direction of Dr. Michael Hart in the Music Department, he completed a thesis titled, “The effect of music on working memory, sustained attention, and stress”.  Karthik has been working as a Project Manager in the Complete Care Management Department at Kaiser Hospital. His job responsibilities were related to the evaluation of patient quality assurance and quality improvement.  He was responsible for the development and implementation of systems for tracking patient data and participated in the oversight of staff in a variety of departments. Karthik was recently been promoted to Assistant Department Administrator for the Kaiser Simi Valley Medical Offices Family Practice Department where he is managing day to day operations of the Simi Valley Clinic. In his spare time he continues to play bass in two bands on the weekends.

Karthik received the award from Dr. Jamie D. Bedics during the Graduate School of Psychology Commencement Reception on Friday, May 13, 2016.


Talk With an Advisor