The Dean’s Advisory Council provides external counsel and support to the Dean to animate the vision, mission and strategic direction of the College of Arts and Sciences, and to further develop its commitment to engagement, exploration, innovation and relevance. Its members bring diverse expertise and perspective as they serve as ambassadors for the College, and offer counsel as we continue to grow and strengthen our programs.

More about the council's purpose and organization (PDF) 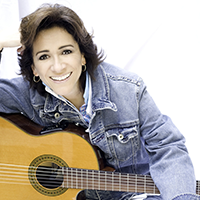 Born in Mexico City into a family of artists and outstanding music industry executives, Cristina Abaroa began her career in Los Angeles, California in the year of 1991 working with producers such as Juan Carlos Calderón, Humberto Gatica, Armando Manzanero, Jorge Calandrelli and Rafael Pérez Botija, just to name a few.

As a songwriter, Cristina is co-author of the hit “El Baile Del Sapito”, and music composer of countless mexican TV themes and soundtracks that have reached sales of more than four million units and are included in albums such as: El Club de Gaby, El Diario de Daniela, Amigos X Siempre, Cómplices al Rescate, Código FAMA and Alegrijes y Rebujos among others.

Lois Capps is committed to helping people improve their daily lives through better schools, quality health care, and a cleaner environment. Before succeeding her husband Walter in Congress, Lois had successful careers in both nursing and education.  Her experience in these two areas deeply informed her eighteen years of work in Congress.  Capps was a respected leader in Congress on issues of public health, passing legislation to address the national nursing shortage, detect and prevent domestic violence against women, curb underage drinking, improve mental health services, provide emergency defibrillators to local communities, bring CPR instruction to schools, and provide immediate Medicare coverage to patients suffering from Lou Gehrig’s disease. Capps has also been at the forefront of efforts to protect the environment, leading efforts to stop new oil and gas drilling off our coasts, eliminate new oil drilling in Los Padres National Forest, and protect consumers from shouldering the financial burden of cleaning up MTBE contamination in their water supplies.  She was also a leader in gender and LGBTQ issues as well as efforts to make college more affordable.

She retired from Congress in January of 2017 and is grateful to return and engage full-time with the community she loves.  She is the proud grandmother to eight wonderful children. 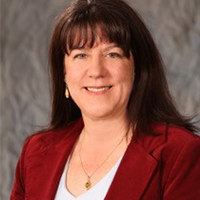 Mary Ellen Cosenza, PhD, DABT, ATS, ERT, RAC is a regulatory consultant with over 30 years of senior leadership experience in the biopharmaceutical industry in the U.S., Europe, and emerging markets. During her 20-year tenure at Amgen, she led the US Regulatory Department, the International Emerging Markets Regulatory Department and served as an Executive Director of Global Regulatory Affairs and Safety focusing on Early Development and Inflammation. In addition to her leadership roles in Regulatory Affairs, she also served as the Senior Director of Toxicology at Amgen.  Prior to joining Amgen, she served as a Principal Scientist in Toxicology for the Medical Research Division of American Cyanamid Company (now Pfizer).

While at Amgen, Mary Ellen was responsible for both early- and late-stage development programs resulting in numerous successful IND, CTA, NDA, MAA, and BLA submissions in a broad variety of therapeutic areas and modalities.  In addition, she played a key leadership role in preparing teams for global health authority meetings with FDA, EMA, and regional country health authorities, including several FDA Advisory Committee Meetings.

Mary Ellen is recognized as an expert in preclinical biologic drug development and is a founding member of BIO’s BioSafe Preclinical Expert group. She was also a member of an Expert Working Group, operating under the auspices of the International Conference on Harmonization (ICH) for ICH M3(R2). Mary Ellen is well published in the field of biological drug development and authored several chapters on this topic as well.

Mary Ellen received her PhD from St. John’s University, New York, and her MS in Regulatory Science from the University of Southern California, Los Angeles. 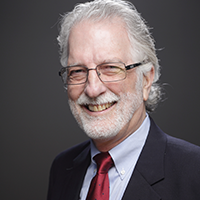 Don Hossler is a Senior Scholar at the Center for Enrollment Research, Policy, and Practice in the Rossier School of Education, at the University of Southern California. Hossler holds the rank of Distinguished Provost Professor Emeritus in the Department of Educational Leadership and Policy Studies at Indiana University Bloomington. He has also served in several leadership roles including the vice chancellor for student enrollment services on the Bloomington campus.

He is the founding executive director of the National Student Clearinghouse Research Center. Hossler's areas of specialization include college choice, student persistence, student financial aid policy, and enrollment management. Hossler has authored or co-authored 23 books and scholarly reports, more than 100 articles and book chapters. His research program has attracted support from such organizations as the Bill and Melinda Gates Foundation, Lumina Foundation for Education, Spencer Foundation, and the College Board.  He has consulted with more than 50 colleges, universities, and educational organizations including the College Board, Educational Testing Services, the Pew Charitable Trusts, the State of Maryland, and the U.S. Government Accountability Office.  Don has lived in Russia and has research in postsecondary education there. Hossler has received career achievement awards from the American College Personnel Association, the Association for Institutional Research, the College Board, and the National Association of Student Personnel Administrators.  In 2015 he was named a Provost Professor and received the Sonneborn Award for Outstanding Research and Teaching from Indiana University Bloomington. This is the highest award the Bloomington campus awards to its faculty members for a distinguished career of research and teaching. 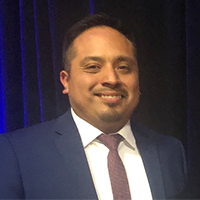 Oscar Madrigal was born and raised in the city of Oxnard. He is a California Lutheran University alumnus, having received his bachelor’s degree in history and master’s degree in public policy and administration.  Oscar has been involved in education since 2007.  He taught geography and world history at Pacifica High School in Oxnard until 2015. He is currently a Spanish teacher at Oaks Christian School. This is his fifth year at Oaks Christian. As a teacher Oscar gets to directly influence our future, with a vital job that helps to prepare future leaders. He is also a city council member for the city of Oxnard, elected in November of 2016. As a council member he represents District 3, which is the northeast part of the city. Neighborhoods in the district are La Colonia, Rose Park, Rio Lindo, West Village, and East Village. Oscar decided to run for City Council because he wanted to give back to the community that gave so much to him. 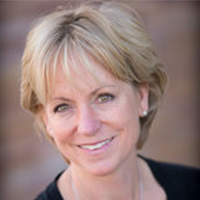 Formerly the Director of Campus Development, Facilities and Workplace Services for the Conrad N. Hilton Foundation

Katherine Miller recently left her position as the Director of Campus Development, Facilities and Workplace Services for the Conrad N. Hilton Foundation. In her role, she is directly involved in the strategic planning and day-to-day operations of both the Agoura Hills Campus and the new headquarters office in Westlake Village, including the facilities, renovation and construction oversight of current and future building phases. She was a key member of the team overseeing the design and construction, as well as post-occupancy of the Hilton Foundation’s first phase–a high performing building which received a LEED Platinum rating with Net-Zero energy goals. Miller is instrumental in establishing enhanced sustainability protocols to help achieve energy, water and waste efficiencies, while reducing building operational costs, as well as educating external audiences about the evolving Hilton Foundation campuses. Miller’s experience encompasses administration, operations and human resource management. She holds certifications in safety and human resource management, as well as a senior professional in human resources designation and is preparing for LEED AP BD&C and ISSP credentialing. Her volunteer efforts have focused primarily on support of women impacted by violence, neglected children and the long-term sustainability of our world. 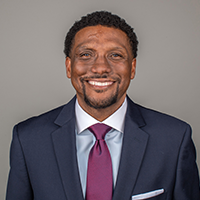 Artis Twyman is in his ninth year as senior director of communications. In this position, Twyman oversees the media relations staff and directs the Rams’ communication efforts.

The 2020 season will be Twyman’s 18th season with the Rams. He previously served three seasons as the team’s director of media relations after spending six years as assistant director of football media.

Prior to joining the Rams in 2003, Twyman spent two years as public relations assistant for the Seattle Seahawks.  He broke into the NFL in 2001 as a public relations intern for the expansion Houston Texans. From 1995-2001, he worked in the Tennessee State University Public Relations Department serving in many capacities, including three years as public information officer.

After being named a finalist in 2017 for the Pro Football Writers Association’s Pete Rozelle Award, which is given annually to the NFL club public relations staff that consistently strives for excellence in its dealings and relationships with the media, the Rams won the award following the 2018 season under the guidance of Twyman. It marked the first time since 1997 the Rams have won the award, and only the second time in franchise history. 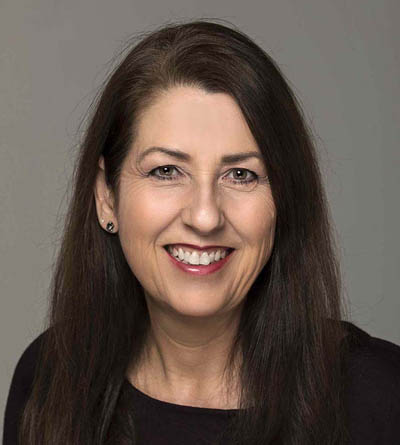 Lory Wingate was named COO of the National Academies of Sciences, Engineering, and Medicine in July of 2021 after serving as SVP and COO of the University Corporation for Atmospheric Research. She has also held senior positions at the National Radio Astronomy Observatory, Lockheed Martin Aeronautics, and The RAND Corporation. Her expertise and passion in varied areas including systems, design, and accessibility have led her to proejcts across the globe including:

assembling a multinational team to design and implement a next generation fighter,
shifting the Very Large Array radio astronomy instrument from a scientist driven instrument
to a survey instrument for all---searching the night sky every night for celestial events,
circumventing the globe twice designing a state-of-the-art operations plan for the newest
global observatory on the planet,
forming a multi-national team representatives from 10 African countries to develop and
submit state-of-the-art, highly creative, yet achievable public outreach proposals for radio
astronomy,
and backpacking across the United States in less than a year!
Lory is a proud Cal Lutheran alumna and is honored to share her "aproach of envisioning the impossible, being bold and fearless, crafting it into an actionable path, optimizing the path, putting one foot in front of the other and being ready to look around and experience the now, seizing opportunities along the way, and achieving the boldest dreams possible!"

Lory Wingate was named COO of the National Academies of Sciences, Engineering, and Medicine in July of 2021 after serving as SVP and COO of the University Corporation for Atmospheric Research.  She has also held senior positions at the National Radio Astronomy Observatory, Lockheed Martin Aeronautics, and The RAND Corporation.  Her expertise and passion in varied areas including systems, design, and accessibility have led her to proejcts across the globe including:

Lory is a proud Cal Lutheran alumna and is honored to share her "aproach of envisioning the impossible, being bold and fearless, crafting it into an actionable path, optimizing the path, putting one foot in front of the other and being ready to look around and experience the now, seizing opportunities along the way, and achieving the boldest dreams possible!"