Give to Cal Lutheran

Shining a Light on Science 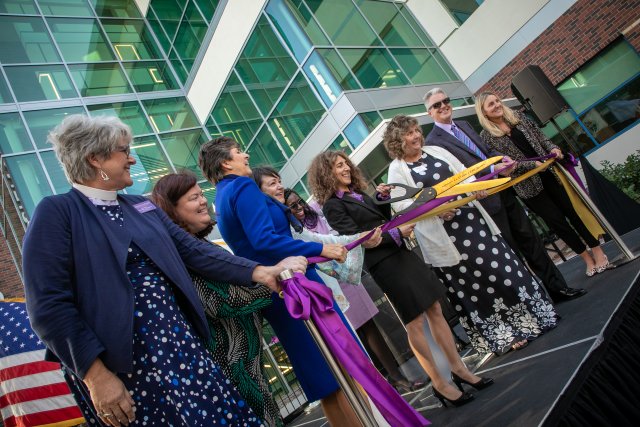 The Cal Lutheran community gathered on campus on October 22 to celebrate a much- anticipated occasion as government officials, donors, and others marked the dedication of the Swenson Science Center. The largest academic building on campus, featuring three floors of light-filled teaching and research labs, the $34 million Center for biology, chemistry, and exercise science, was first envisioned in 2007, and those on hand were suitably impressed by the results.

“The building is magnificent,” said Cheryl Lentz, the daughter of Jim and Sue Swenson, who provided the naming gift for the building, featuring advanced building technology and designed for LEED Silver certification. Named after her father, a pioneer in engineering prototype circuit boards, who passed in 2018, the building would have impressed her father, Lentz said, but he would have been especially pleased in knowing how many students would benefit from the facility. “This was a day my dad was looking forward to. I know he is smiling from above.”

Rod Gilbert, a member of the Cal Lutheran Board of Regents, who, along with his mother, Carol, contributed generously to the building, noted that even under the constraints of the COVID-19 pandemic, “the Swenson Science Center was finished on time and on budget.” While the building was under construction, he said that he and his mother, who passed away last year, would regularly drive by the site to see the progress. While his father, Jack, passed before construction began, “We knew the new facility would raise the university’s national profile.”

“The facilities staff, many of the science faculty, and the donors we celebrate today have set a new facility’s bar,” said President Lori Varlotta. “The higher we set the bar for academic facilities, the greater the outcomes we are able to deliver to our students.”

The faculty and students who are already using the building were equally enthusiastic about their new facility. “In our previous building, there was almost a competition for space,” said Anthony Morgan, a senior biology major who researches developmental processes. “Our new lab space is almost three times as large.”

No one knows the Swenson Science Center better than Michele LeBlanc, Professor of Exercise Science and the Nena Amundson Professor of Biomechanics. LeBlanc served as the “Project Shepherd” for the building, attending every meeting in which the building was discussed since planning began in 2007, making sure that the needs of faculty and students were considered, and that no details would be forgotten in the construction process.

“This has been a dream since 2007,” said LeBlanc, whose spacious and light-filled lab is on the building’s ground floor. One of the features of the building, for which LeBlanc advocated, is that there are ample windows, even in the hallways, so visitors can see the research that is being conducted. “This is a beautiful building. It’s incredible. I think it’s better than anything we could have imagined.”