The ABC's of Cal Lutheran

Learn the lingo and traditions here at Cal Lutheran.

Oh, summon your sons and daughters,
Your banners and flags unfold,
Call them to Alma Mater,
The violet and the gold.

California Lutheran,
College of our dreams,
Upon whose crested summits
Sunbeams dance and gleam. 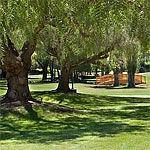 Cal Lutheran is graced with breathtaking grounds bordered by rolling hillsides. The campus is adorned with a variety of trees and plants including many which are native to Southern California. All are welcome to tour the Barbara Collins Arboretum using the tour maps as a guide. This project is a joint effort by Dr. Collins, who selected and classified the flora identified on the maps, and the University to provide visitors an opportunity to learn about botany and enjoy the meditative beauty of our campus.

The Campus Store is the place for books, class supplies, cards, snacks and Cal Lutheran gear and merchandise. If you don't find what you're looking for, ask a store manager for help. The manager may be able to special order what you need. 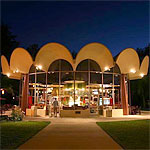 The Centrum is one of the central gathering places on campus and is a great place to grab lunch or a cup of coffee, or meet with a professor. The Centrum offers standard grill fare, salads, sandwiches, ice cream and drinks. Food can be purchased using cash, meals or munch money.

The school colors are violet and gold. 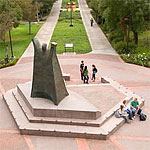 Officially titled "The Enormous Luther," this campus landmark is affectionately known to students as "Gumby." Created by Sir Bernardus Weber, a founding faculty member in the Art Department, the nearly 5,000-pound statue was paid for by the Class of '64, Cal Lutheran's first graduating class, and dedicated in 1988. The base of the statue was refurbished in spring 2006. When asked about his creation, Weber responded that he wanted to signify the hugeness of the impact Martin Luther had on church history. 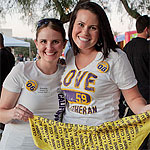 Are you taking any family vacations this year? Take a Cal Lutheran flag with you! We want to Follow the Flag as you celebrate special moments, attend cool events and travel the world. Send us photos of your family travels with the bandana and we will display them on the CLU Alumni & Family Relations website! To request a flag, send your name and mailing address to alumni@callutheran.edu. When you get home, you can upload your photos to share with the Cal Lutheran community. 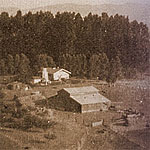 California Lutheran College, founded in 1959 on land donated by the son of Norwegian immigrants, welcomed its first students in September 1961. The young college's early commitment to excellence led to accreditation by the Western Association of Schools and Colleges (WASC) during its first academic year. In 1986, the name was changed to California Lutheran University to better reflect the breadth of undergraduate, graduate, and professional programs. Now, 50 years after welcoming its first class of 330 students, the University has an enrollment of more than 2,500 undergraduate and approximately 1,400 graduate students.

Founded by Cal Lutheran in October 1994, KCLU is one of the area's most listened-to news stations, providing NPR and local news programming to more than 70,000 listeners at 88.3 FM in Ventura County and at 102.3 FM and 1340 AM in Santa Barbara County. Listeners can also tune in live or hear archived stories from around the world at kclu.org. In May 2011, the station relocated from Mount Clef Hall to a brand new state-of-the-art facility on campus. The KCLU Broadcast Center is operated as a community service of California Lutheran University. 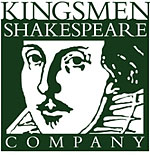 Since debuting in 1997, the Kingsmen Shakespeare Festival has become one of Ventura County's most popular outdoor theatrical events. Performances are staged in Kingsmen Park on weekends during July and August. Visitors are immersed in a unique Shakespearean experience at our creekside venue, complete with croaking frogs. For admission information and a schedule of performances, visit kingsmenshakespeare.org. 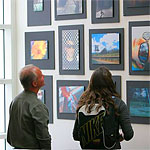 Kwan Fong Gallery of Art and Culture holds exhibitions by nationally recognized artists as well as Cal Lutheran faculty and students. The gallery, located in Soiland Humanities Center, is open to the public Monday through Saturday from 8 a.m. to 8 p.m.

Simply put, everyone is welcome here. Our students come from more than 50 countries and 30 different denominations and faith backgrounds. No one is an outsider. That is one of the most deeply held values in the Lutheran tradition and nowhere more evident than on our campus. A student's personal convictions and beliefs will be respected and honored. At the same time, we will challenge and strengthen students with new intellectual and theological reflections and provide opportunities for students to encounter the Christian faith in thought and practice.

The Mail Center is the University's post office. Every on-campus student receives a mailbox that they retain for all four years they are a student here. Anything you can do at a city Post Office, you can do at the Mail Center, including FedEx and UPS. To send mail to your student, address it to: 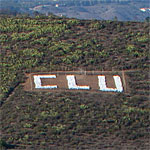 The "CLU" rocks are located on Mount Clef Ridge overlooking campus. They have been a fixture of CLU's landscape since its second academic year (1962). Every year, in one of Cal Lutheran's longest-standing traditions, freshman and transfer students paint the rocks. 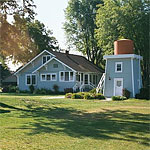 Pederson Ranch House, home to the Music Department, was part of the original Pederson family homestead. Built circa 1913, the house was designated a Ventura County Historical Landmark in 1978. The house and its water tower were renovated in 1986 and relocated to the corner of Regent Avenue and Faculty Street to make room for Ahmanson Science Center. 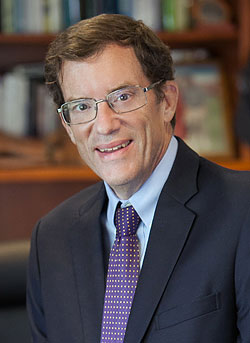 The distinguished teacher, scholar, and academic leader is an author and speaker on higher education. His scholarly work is in the field of American history, with a specialization in urban history and the history of sport.

An alumnus of McGill University, Kimball received his master's degree and doctorate in history from The University of Chicago. Well respected in academic circles and in the ELCA college network, Kimball served on the Council of Independent Colleges (CIC) Chief Academic Officers Task Force from 2002 to 2006 and chaired the group in 2005–2006. He also served as chair of the Academic Council of Associated Colleges of the Twin Cities.

A native of Massachusetts, Kimball and his wife, Liz, live in Thousand Oaks with their two children, Glenn and Rachel. They are members of Holy Trinity Lutheran Church.

OFFICE OF THE PRESIDENT