School of Management
Forward Together

2 Day Seminar for Senior and Top Executives from All Industries and Disciplines with Major General Mike Snodgrass, USAF, ret. 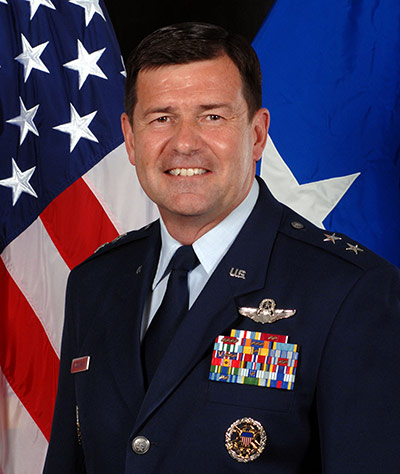 Regarded as “full spectrum leader”, Major General Snodgrass will bring his high energy style to participants of this seminar. Senior executives, VPs, and leaders of organizations from all industries who have demonstrated success in managing but need to augment their leadership skills will explore new and fresh insights in the art of leadership.

The topics presented include, but are definitely not limited to, using change to drive growth, motivating individuals and teams to success, employing meaningful talent strategies to attract and retain top performers, learning from various practices that have worked within our Armed Forces to sustaining growth through subordinate leader development, as well as enabling a culture of innovation and inclusion.

For more information, see our Frequently Asked Questions, or contact Ms. Kim Nakano at the Cal Lutheran School of Management at (805) 493-3952.

C-level executives, VPs, and leaders of organizations who have demonstrated success in managing but need to augment their leadership skills.  Leaders from all sectors of industry, including non-profits are welcome.

Major General Snodgrass is the most inspiring leadership coach I have ever worked with.

Mike approaches leadership from a broad perspective formed by over three decades of experience and success in both the US Air Force and industry.

C-level executives, VPs, and leaders of organizations who have demonstrated success in managing but need to augmenttheir leadership skills.  Leaders from all sectors of industry, including non-profits are welcome.

It is an excellent opportunity to learn about, observe, and explore best practices from a diverse set of leaders and industries. The seminar will also be an opportunity to meet and network with senior-level peers from your and other industries.

Maj. Gen. (ret.) Michael A. Snodgrass last served as the Assistant Deputy Under Secretary of the Air Force, International Affairs, Office of the Under Secretary of the Air Force, Washington, D.C., where he was responsible for formulating and integrating Air Force policy with respect to political-military relationships, security assistance, technology and information disclosure issues, and attaché affairs in support of U.S. government objectives. General Snodgrass entered the Air Force in 1978 with a commission from the U.S. Air Force Academy. A graduate of the USAF Fighter Weapons School, he has flown the F-4, F-15, F-16, HH-60 and C-130. He served as F-16/F-22 Program Element Monitor for the Office of the Assistant Secretary of the Air Force for Acquisition. He has commanded at the squadron, group and wing levels, and served on the Joint Staff as Chief of the Forces Division (J8). Prior to his current assignment, he was Chief of Staff, U.S. Africa Command, Stuttgart, Germany. General Snodgrass is a command pilot with more than 3,200 flying hours, more than 200 of those in combat. His experience includes more than 100 combat missions over Iraq from 1996 through 2000 as both a squadron commander and Commander of the 332nd Air Expeditionary Group, Al Jaber Air Base, Kuwait. After retiring from the Air Force, he  served in senior executive roles in the Aerospace and Defense sector, leading large organizations and achieving new business bookings in excess of $1B.

This seminar is about more than just "style."  It is about how to elevate your skills as a manager to those of a leader.   After retiring from the Air Force, Mike served in senior executive roles in the Aerospace and Defense sector, leading large organizations and achieving new business bookings of over $1B.  His practical and straightforward approach is derived from not only his military experience but his ability to adapt those skills to the private sector. It is industry agnostic, and applicable to any leadership challenge.

There are several hotels in the Thousand Oaks area that are highly regarded. We have pre-negotiated rates with a few. If you need detailed information, please send an email to knakano@callutheran.edu (Ms. Kim Nakano)

The fee for the seminar is $1895. There is a $200.00 discount per registrant if you register on or before Friday, May 18, 2018. The optional golf outing is not included in the registration fee.

You can register and pay online through the universty's payment system.

If you cancel on or before May 18, 2018, you will receive a refund, less a $50.00 non-refundable administrative fee (per person). California Lutheran University reserves the right to cancel at any time prior to the scheduled date of the seminar.  In the event of cancellation by the University, you will be notified and receive a full refund.

No. The course content will be delivered during the seminar, which will be held on the beautiful Cal Lutheran University campus in Thousand Oaks, California. The optional golf outing is made available so that attendees can unwind at the completion of the seminar and continue to build social and business relationships with their new colleagues.

The golfing event will take place at the exclusive Sunset Hills Country Club in Thousand Oaks. Tee time is 3:30pm on Saturday, June 9, 2018. Cost is $44 for 18 holes. Cart rental is included. Bring your clubs!

Business casual for Friday session (followed by dinner at local restaurant). Casual attire for second day session. For those who have signed up for the optional golf outing, there will be time  to change into golfing gear after the seminar, if needed.