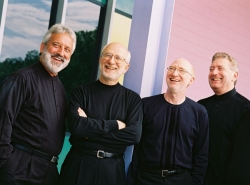 Called the “high priests of the percussion world” by the New York Times, Bob Becker, Bill Cahn, Russell Hartenberger and Garry Kvistad comprise what is considered one of the premiere percussion ensembles in the world today. The influential composer Steve Reich has called them “probably the most acclaimed percussion group on earth.”

After more than four decades of continuous collaboration, the four master percussionists of NEXUS are internationally revered, not just for their virtuosity, innovation and creativity, but for their ability to create extraordinary music out of just about anything: Swiss cowbells, Chinese drums, Tibetan prayer bowls, Middle Eastern hand drums and Southeast Asian water buffalo bells, to name just a few.

With a repertoire ranging from military music to the novelty ragtime of the 1920s, from the haunting rhythms of Africa to the groundbreaking compositions of Japanese master Toru Takemitsu and others, NEXUS delivers a stunning spectacle of sound, rhythm and movement.

The Toronto-based quartet has toured the world and was the first Western percussion group to perform in the People’s Republic of China. It has performed with every major symphony orchestra in Canada and the United States, as well as with orchestras in London, Birmingham, Germany, Tokyo, France, Norway, Taipei and Finland. Previous performances in Southern California include at the Ojai Festival in 2007 and 2008, prompting the L.A. Times music critic to comment, “Ojai felt, for that hour, like holy ground.”