Latinos in STEM: From Farmworker to NASA Astronaut! 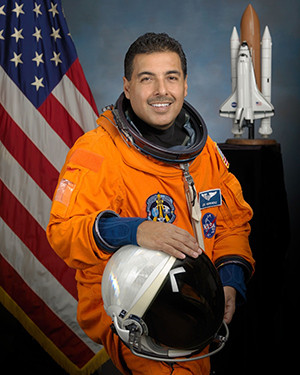 José Hernández, MS, will share the story of his journey from migrant farmworker to NASA astronaut. Amazon Studios is working on a film based on Hernandez’s extraordinary life titled “Reaching for the Stars.”

Hernández spent much of his childhood on what he calls “the California circuit,” traveling with his family from Mexico to Southern California each March, then working northward to the Stockton area by November, picking strawberries and cucumbers at farms along the route. They returned to Mexico for Christmas and started the cycle again come spring. After graduating from high school in Stockton, Hernández enrolled at the University of the Pacific in Stockton, where he earned a degree in electrical engineering. He was awarded a full scholarship to the graduate program at UC Santa Barbara, where he continued his engineering studies. In 1987, he accepted a full-time job with Lawrence Livermore National Laboratory, where he had worked at a co-op in college. In 2004, NASA selected Hernández as a member of its 19th class of astronauts. He was chosen for a mission in 2007 and flew as the flight engineer on a 14-day mission in 2009 aboard the space shuttle Discovery to the International Space Station. In addition to his flight engineer duties, Hernández operated one of two principal robotic arms. Before being selected as an astronaut, he worked at NASA as the branch chief of the Materials and Processes Branch at the Johnson Space Center in Texas.

Admission is free. RSVP on the STEAM website at CalLutheran.edu/steam.

The event will be livestreamed at Callutheran.edu/live.

This program is made possible by an Amgen grant (STEAM) and the Office of Talent, Culture and Diversity.

The Office of Talent, Culture and Diversity