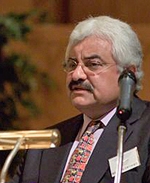 Kamran Mofid is founder of the Globalization for the Common Good Initiative and co-founder/editor of the Journal of Globalization for the Common Good. Born in Tehran, Iran, he received his bachelor’s and master’s degrees in economics from the University of Windsor, Ontario, and his doctorate in economics from the University of Birmingham, U.K. In 2001 he received a Certificate in Education in Pastoral Studies at Plater College, Oxford.

For the past 28 years, he has taught development economics, business studies, international business and the political economy of the Middle East. In recent years, he has developed interdisciplinary short courses, seminars and workshops on a wide variety of topics including economics and theology, religions and globalization, altruism and service: Islam and Christianity in dialogue, and business ethics and corporate social responsibility, among others.

Mofid has been a frequent speaker at major international conferences and universities, as well as on the BBC World Service, BBC Coventry and BBC Radio Oxford. He has also been interviewed by the Canadian Broadcasting Corporation (CBC) and The Voice of America.

Center for Leadership and Values in the School of Business